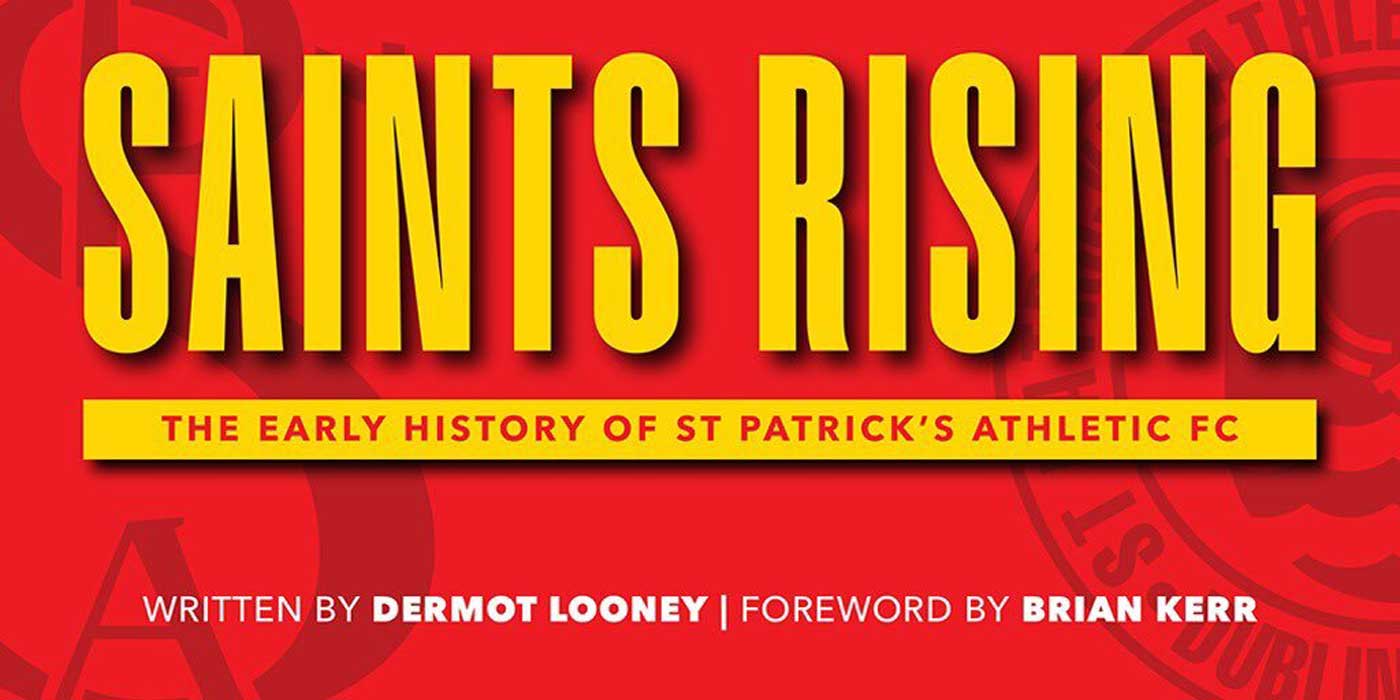 Over the past four years, we have been recounting stories of the early history of St Patrick's Athletic in these pages. We are delighted to announce that a book on the history of our club will shortly be available. But we need your help to get it to the printing presses!

Saints Rising: The Early History of St Patrick's Athletic FC is, remarkably, the first book ever written on St Pat's history; most other League of Ireland clubs and our Dublin rivals have had their histories published. Let's make sure our great history is told too!

From their formation as a team of young railway workers playing in the Phoenix Park to the golden era of League of Ireland titles and FAI Cup success, St Patrick's Athletic rose like no other club in Irish football.

Saints Rising charts the history of the club from its formation in 1929 through to the end of a decade of extraordinary League of Ireland success in 1961. It is the first book on 'the Pride of Inchicore;' a Dublin institution with one of the great rags-to-riches tales in Ireland's sporting lore.

The book tells the tales of Pat's and Irish football legends like Shay Gibbons, Ronnie Whelan Snr,Harry Boland, Ginger O'Rourke, Dinny Lowry and a host of other well-known and lesser-known Supersaints. It looks at the history of the club's early grounds, including our beloved home of Richmond Park, and the place of 'the Athletic' in the proud history of Inchicore and the wider community

Saints Rising was compiled over 4 years via newspaper archives, club memorabilia, interviews with players and fans, and a range of other historical sources.


Written by Saints fan Dermot Looney, with a foreword by Brian Kerr, we are grateful for the support of St Patrick's Athletic FC, the Patron Saints and the whole Pat's fan community to date. But we need your help in getting the book to print.

This was launched on September 1st and you can find it via the HistoryStPats social media channels or by going directly to www.kickstarter.com/projects/dlooney/saints-rising.


Backers of this project will receive the first books to come off the printing presses, with a host of other rewards available to Gold, Silver and Bronze level supporters. You can even become a part of Pat's history yourself by having your name included in the book!

Gold Level backers will be able to write their names into Pat's history, with a mention in the book's acknowledgements. They will receive a copy of the book signed by the author and Brian Kerr, as well as 4 limited edition, specially-commissioned 'Saints Rising' art prints. For a pledge of €100, the Gold Level is open to backers from all over the world.

Silver Level backers will receive a copy of the book signed by the author and Brian Kerr, along with 2 of the 4 limited edition, specially-commissioned 'Saints Rising' art prints. For a pledge of €50, the Silver Level is available to backers from Ireland and Britain only.

Bronze Level backers will receive a copy of the book signed by the author, and 1 of the 4 limited edition, specially-commissioned 'Saints Rising' art prints. For a pledge of €25, the Bronze level is available to backers from Ireland and Britain only.

If you are unable to access the Kickstarter, but would still like to support this crowd-funding initiative, please get in touch at dermotlooney@gmail.com

If the Kickstarter crowd funder is successful in raising enough money, the book itself is due to go on general sale in November. Saints Rising is planned to be the first in a two-part history of the club, with a follow-up book on the modern history of St Pat's due to follow.