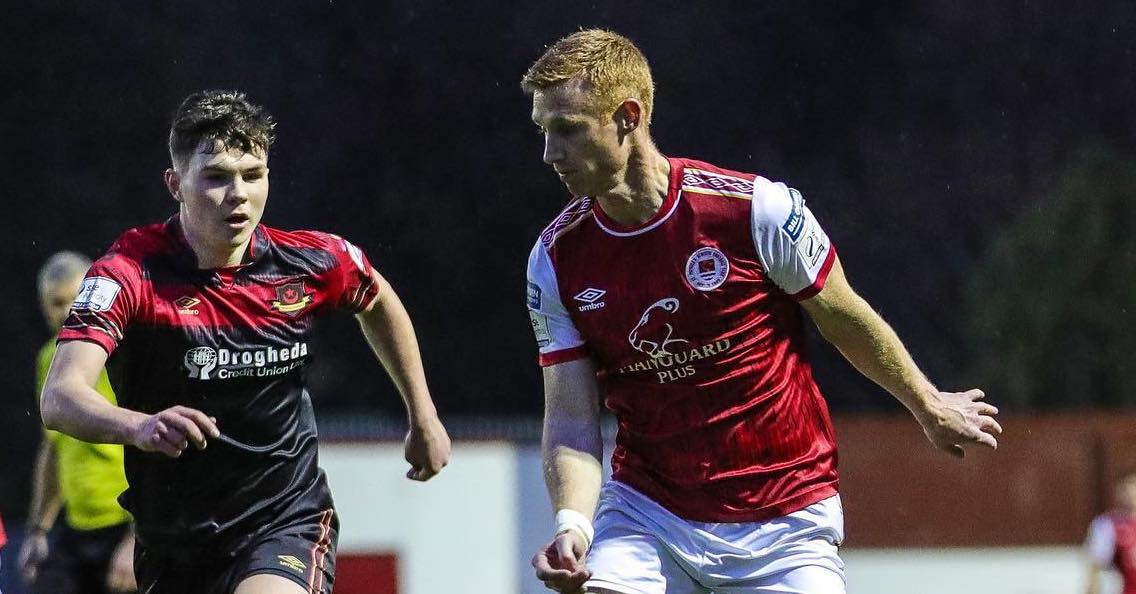 St Patrick's Athletic will make the short trip up the M1 on Friday night to take on Drogheda United at Head in the Game Park.

Kick-off is at 7.45pm, with away tickets available online HERE

It is a double game weekend, with The Saints also in action on Monday night when they will travel to Derry City in a game that has been brought forward due to the European involvement of both clubs in the summer.

The Saints were in action last Friday night and suffered a 4-0 defeat at the hands of Derry. Goals from Matty Smith, Cameron Dummigan and a brace from Jamie McGonigle helped the Candystripes victory at Richmond Park.

St Pat's into the game in 5th place, however they could return to third tomorrow with a win.

They have won three out of their opening 13 games, drawing four and losing six.

They played Dundalk last Friday in the Louth derby and were beaten 4-1 at Oriel Park. Darragh Leahy opened the scoring for Dundalk with a brace either side of half time. Patrick Hoban tripled their lead after 58 minutes from the penalty spot. Ryan Brennan did pull one back for Drogs but a late John Martin goal put the icing on the cake for The Lilywhites as they enjoyed a 4-1 win over their rivals.

It is St Pats' second time to meet Drogheda in the league this year. They met at the start of April and the spoils were shared at Richmond Park.

Dayle Rooney fired Drogs ahead early but Darragh Burns struck back late on to ensure both sides earned a point from the tie, Burns' goal was this week voted as the St Pat's Goal of the Month for April, sponsored by The Clock Pub Thomas Street.

Tim Clancy will be hoping for a positive result on his return to Drogheda for the first time in the opposition dugout, he spent four years in charge at Head In The Game Park, leading Drogs to the First Division title in 2020.

Clancy's former Assistant Kevin Doherty is now Manager and will be aiming to get one over his former colleague.

Manager Tim Clancy is looking forward to Managing in Head In The Game Park again, but is fully focused on helping his team gain the three points:

"It's a game that we are looking forward to and obviously we'll be trying to get over the disappointment of the Derry game last week. We weren't good enough and we know that ourselves, we've had a good week of training and we're going to approach the game with positivity and try to win the game. It's a difficult place to go, Drogheda are a very hard team to play against and we are certainly going to have to be at it.

Striker Eoin Doyle has also been looking ahead to the game:

"We're really looking forward to going up and playing Drogheda tomorrow night, they frustrated us when we played them at home earlier in the season in the 1-1 draw, so we are hoping to get up to Head In The Game Park and get a good result.

After our bad result against Derry last week, the level of intensity in training has been really good this wee, we've worked really hard this week and applied ourselves really well, we hope our preparations give us the best chance possible to get the win.

We've got a number of tough fixtures coming up and if we can come away from Drogheda with a good result, it will put us in goos stead going forward."

Tickets: Kick-off is at 7.45pm, with away tickets available online HERE

LOITV: For those who can't make it to Drogheda, the match will be live on LOITV for a match pass for 7 euro.