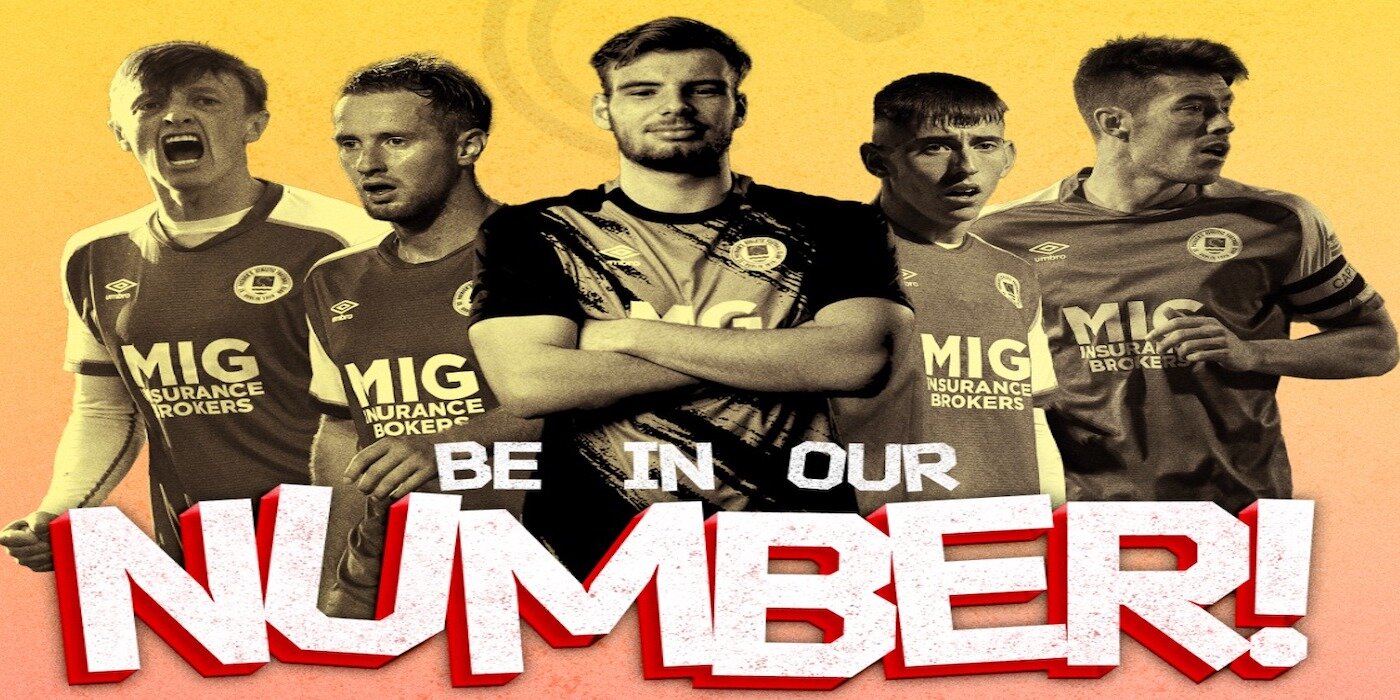 The Capital is all set for another Dublin derby on Sunday, but this time around, the prize is much bigger as St Patrick's Athletic and Bohemians go head-to-head in the FAI Cup Final.

Over 35,000 tickets have been sold with the game set to break the attendance record for an FAI Cup Final at The Aviva.

Tickets remain on sale via Ticketmaster, if you are unable to attend, you can watch all the action live on RTE TV.

St Patrick's Athletic have won the FAI Cup on three occasions and will be hoping to bring the curtain down on an impressive year with some silverware on Sunday afternoon.

They'll travel to the Aviva looking to bring the FAI Cup back to Inchicore for the first time since 2014.

Road To The Final

The Saints have played four games on their way to the final and scored 13 times in an impressive cup campaign so far.

It stared at Richmond back in July with an emphatic 6-0 win over Bray Wanderers.

Two goals from Billy King, as well as strikes from Ben McCormack, Sam Bone, Paddy Barrett and Jay McClelland were enough to seal their place in the next round.

Following victory over Bray, St Pat's travelled to Cork where there were late dramatic scenes at Turners Cross.

Chris Forrester's 89th minute penalty looked to have booked his side's place in the quarter-final, but Barry Coffey's goal at the death brought the game to extra-time.

The teams couldn't be separated and a penalty shootout followed.

Four perfect penalties from Forrester, McCormack, McClelland and Alfie Lewis along with some Vitezslav Jaros heroics ensured The Saints' progress.

A Darragh Burns' double and a late Ronan Coughlan penalty at Richmond in September got 10-man Saints over the line in the quarter-finals against Wexford in Inchicore.

The Saints drew Dundalk at home in the semi-finals, and it was a magical night at a sold-out Richmond Park.

Billy King opened the scoring for St Pat's in the first half, but Patrick Hoban's strike levelled proceedings just before the half-time break.

However, second-half goals from Matty Smith and Darragh Burns put the icing on the cake as they ran out 3-1 winners to ensure it would be an all-Dublin affair on Sunday at The Aviva.

Bohemians know a win on Sunday is the only way of securing European football next season.

They were held to a 1-1 draw on the final day of the season at The Showgrounds by Sligo Rovers.

Johnny Kenny had put Sligo ahead, but former Saint Georgie Kelly equalised late on, however the draw wasn't enough as Derry win in Dundalk meant a 4th place finish for The Cadnystripes.

A St Pat's win on Sunday will mean the last European spot goes to Derry, a Bohemians' win will mean they'll be in Europe again next season as the cup winners.

The sides have met on four occasions this season in the league and all four games have been hugely entertaining games.

Their most recent meeting came just four weeks ago, and it was a 2-2 draw at Richmond.

Billy King and Jay McClelland goals either side of the half-time break gave the home side a two-goal advantage but Bohs fought back and goals from Ross Tierney and Promise Omochere earned them a point in Inchicore.

Their first meeting of the year came way back in April. Ronan Coughlan's second-half header was the only goal of the game at Dalymount as St Pat's powered to a 1-0 victory.

Perhaps the most dramatic of the meetings this season was The Saints' 2-1 victory at Richmond in May.

Dawson Devoy's 89th minute penalty cancelled out Matty Smith's first half opener and it looked as if it had earned the Phibsborough outfit a point, but substitute Robbie Benson was hauled down in the box four minutes into injury-time, he converted the penalty to ensure all three points stayed in Inchicore.

The other Dalymount derby was a 3-2 victory for The Gypsies.

Georgie Kelly opened the scoring, but St Pat's were level soon after when Andy Lyons put the ball into his own net after a great Darragh Burns strike.

Two second-half goals from Tyreke Wilson and Liam Burt, as the Saints were reduced to 9 men, put Bohs' in control, and despite a late Jay McClelland goal, the home side held on for all three points.

Along their way to the 2021 FAI Cup Final, Keith Long's side have accounted for College Corinthians, Shamrock Rovers, Maynooth University Town and Waterford FC to set up a day with destiny against St Patrick's Athletic on Sunday, in the first all-Dublin FAI Cup final since 2000.

Stephen O'Donnell will be looking to win his first FAI Cup as a Head Coach on Sunday, he's been involved in five finals as a player, winning three, two with Dundalk and one with Sunday's opposition Bohemians.

He is hoping to make some special memories at The Aviva:

"It's a great occasion playing at the national stadium. I have experienced both sides of it but can take memories from both sides. They're really enjoyable occasions, on what is a massive day on our domestic calendar.

It's the biggest day of the year, in a lovely arena in front of a big crowd.

You will always remember different moments and scenarios and you will have different memories, but they are great memories to have, and I am delighted our boys will have those opportunities to make those memories and make special moments on Sunday.

We have a great bunch of players. It's not often you say it, usually you might have a squad of players and then a couple of lads that you might have doubts about their application and attitude, but I can honestly say I don't have one individual where I can say I'm not sure about him or his character.

They are all great boys, all applied themselves and trained really well so I am delighted they are getting their rewards not and playing in a cup final.

We have had players who won cup finals and great experience and then we have other boys that haven't played in one, so I am delighted for them to go and experience it."

Speaking about the opposition on Sunday, O'Donnell is aware of the attacking threat Bohs will pose:

"Bohs have some very good individuals. They are the top scorers in the league, so they carry a lot of attacking threat. Our four games have all been very tight. Not so much in the actual games being very tight but the scorelines have been tight.

The games have been expansive and really open and entertaining. There's a lot of good individuals in both sides, a lot of good footballers on a big pitch and that should lend itself to being a very good game on Sunday.

Jamie Lennon is one of many St Pat's players who will play in their first FAI Cup Final on Sunday, he is excited about the chance to play at the national stadium in such a big occasion:

"I'm really looking forward to the game, It's a big opportunity for a lot of us who haven't been in this position before but we have got a lot in the group here as well who have been here and have won it so that experience will count to us once it gets to the day and the weekend.

Overall, it's just excitement. It has been almost a month since the semi-final, so we are all really looking forward to it. It should be a great day for all of us and our families.

Since Stephen has come in, he has changed a lot in the club. Everything from the personnel, style of play, the culture and now we are starting to see the rewards of it.

No matter what happens in the final, I am sure everyone will understand that we have had a good season and we will realise that we are a team on the up and are building something special here.

We just wanted to round it off now with some silverware and have one of those special night at the Aviva."

The 23-year-old made his 100th league appearance for the club in the scoreless draw in Waterford last Friday, and is looking forward to going into the head of battle in front of a huge crowd on Sunday:

Bohs are a good side, and they have players who can produce moments of magic, but so do we, so if it is anything like the game back in Richmond a couple of weeks back, everyone is in for a cracker."

Team news: John Mountney (knee) is the only absentee.

Podcast: Episode 19 of the Talking Saints podcast is available now on all major streaming platforms. Host Jamie Moore is joined by Christy Fagan, Stephen O'Donnell, Jamie Lennon, John Mountney and Dermot Looney from History St Pat's for a bumper episode, you can also watch it above on Youtube.

Where Can You Watch The Game: Tickets for the game are available on Ticketmaster. The game will also be live on RTE2 TV & the RTE Player worldwide. Kick-off is at 4pm.