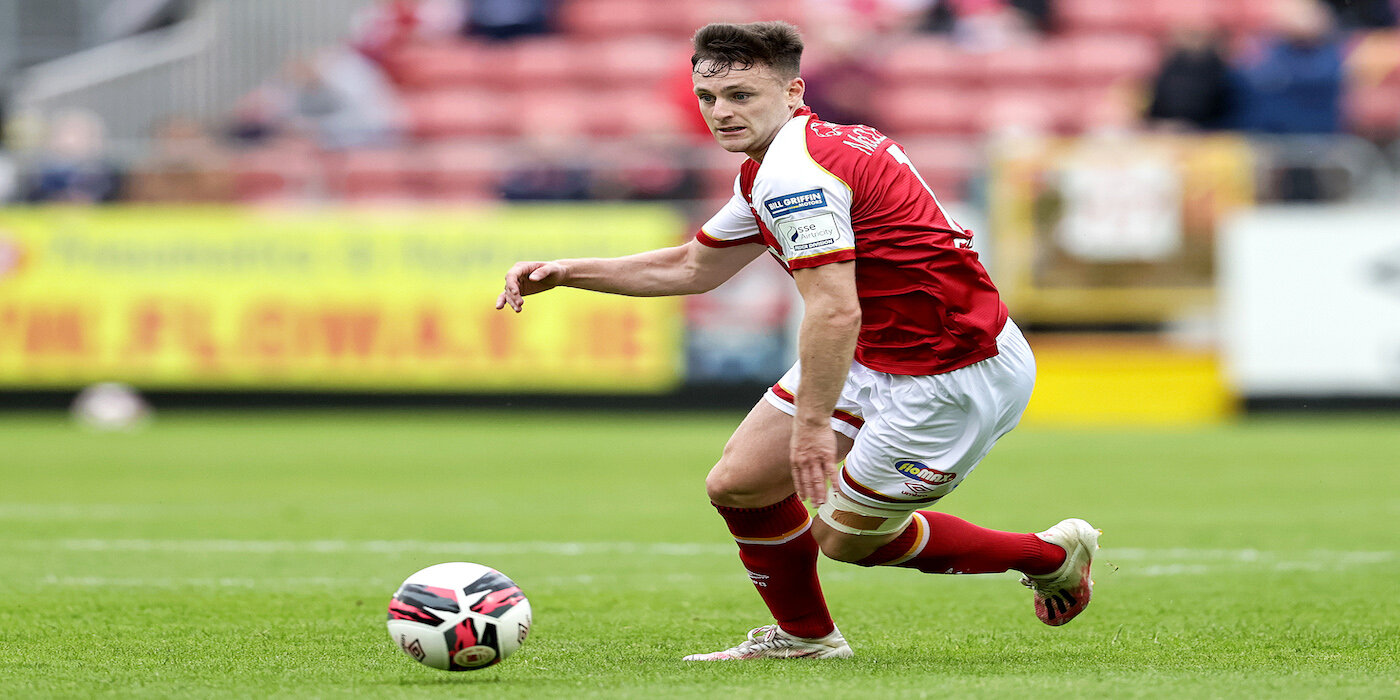 St Patrick's Athletic will welcome Finn Harps to Richmond on Friday night for what is their final home game of the season.

The game will kick off at 7.45pm and will be live on LOITV, with tickets available for home and neutral fans from our website and from Richmond Park (during normal office hours), away tickets are available via Finn Harps directly.

Last time out, St Pat's were beaten 3-0 at home to Sligo Rovers. First-half goals from Ryan DeVries and Johnny Kenny and an injury-time strike from Adam McDonnell ensured all three points went back west with Liam Buckley's men with their place in Europe confirmed.

The victory means that Sligo are still in contention for second place, however The Saints only need one point from their remaining two games to ensure they finish in second.

Ollie Horgan's Finn Harps have had another strong season, they come into Friday's game in 8th place, with 40 points from their 34 games so far. That total sees them level with 9th placed Waterford and four points behind Drogheda United in 7th, the fight to avoid the dreaded relegation play-off spot is going right to the wire.

Harps' were last in action on Friday and drew 1-1 with Derry City at Finn Park.

Tomorrow's match will be the fourth and final meeting between the sides this season.

The most recent came in Ballybofey in August and Ollie Horgan's men claimed all three points. Tunde Owolabi opened the scoring for the home side but two minutes later, St Pat's equalised through a penalty from Chris Forrester. However, two further goals from hat-trick hero Owolabi ensured The Harps took all three points.

The Super Saints picked up maximum points in the other two fixtures.

The teams first met in April at Finn Park and goals from Matty Smith and Billy King in either half ensured they brought all three points back to Inchicore, while in June, two goals from Ronan Coughlan as well as strikes from Robbie Benson and Alfie Lewis powered the Inchicore side to a 4-1 victory at Richmond

Manager Alan Mathews has been looking forward to the final home game of the season:

We have mixed the team up the last couple of games, and the players have the opportunity to come in a stake a claim for a place in the side.

We want everybody in good form, we want the team to be generating positive momentum coming into the cup final against Bohemians and how better to do that than play competitive games, with an important three points very much at stake."

Mathews knows the importance of the games against Finn Harps and Waterford next Friday, given their respective positions in the table:

"The points tally that the sides at the bottom end of the table, with the exception of Longford, has been incredible. On a couple of other seasons, it would probably be enough for mid table.

Finn Harps have a really good season. They'd a very strong start to the season and have picked up again recently. We found the games against Finn Harps difficult all season, both home and away, and Friday will be no different. They know what they have to do to avoid getting into that play-off spot.

We'll have to be on our game and make sure were are ready for fighting, battling but also getting the ball down on the ground."

Jason McClelland has been in impressive form in recent weeks, and was on target in the 2-2 draw with Bohemians last Monday, the 24-year-old hopes the impressive home form since the return of fans can continue:

"Getting the fans back in has been amazing. We had to start the season with no fans but the attendances have been gradually building every week and you can really hear the difference.

Getting family and friends in again has been great too and I think it does give us a boost in the last couple of minutes and that has kind of driven us on.

Something that we looked at from the start of the season was to get European football back and it's great to have achieved that but we want to keep going now, keep pushing and keep winning. We want momentum going into every game we have left and there are no easy fixtures.

We have Finn Harps at home and Waterford away, two teams who are pushing and trying to stay up and trying to avoid being in the play-off so they are tough games and we need to be ready.

All of our lads are pushing for places to start on the 28th of November in the Cup Final, and this is where it happens, this is where you get your place from playing well in the last couple of games."

Match Programme: You can download your free copy of 'The Saint' from our website on Friday morning.

Where Can You Watch The Game: The game will kick off at 7.45pm and will be live on LOITV, with tickets available for home and neutral fans from our website and from Richmond Park (during normal office hours), away tickets are available via Finn Harps directly.