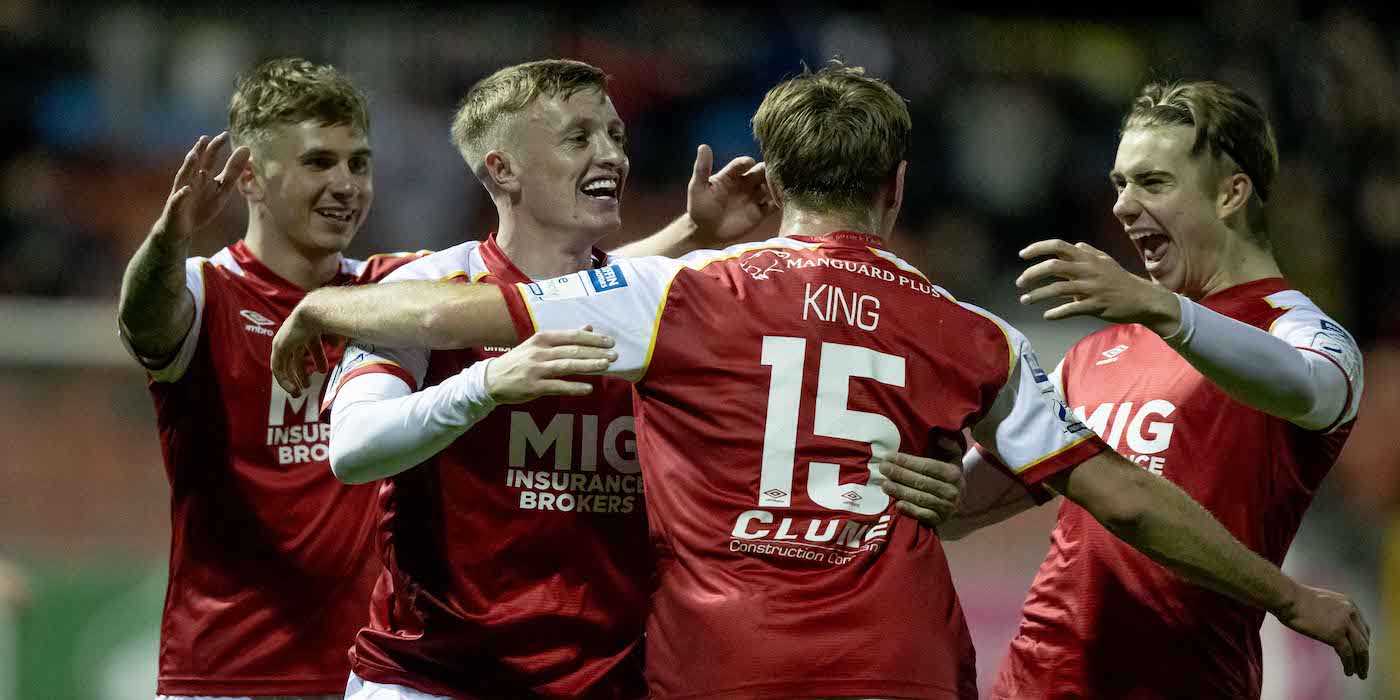 It was honours even in Richmond Park on Monday evening as St Patrick's Athletic and Bohemians played out an entertaining 2-2 draw. Billy King and Jay McClelland put The Saints two goals ahead, but Bohemians fought back and goals from Ross Tierney and substitute Promise Omochere rescued a point for Bohemians. Both sides did go in search of a winner but it wasn't to be as the Dublin rivals had to settle for a point each.

With an FAI Cup Final between the two sides on the horizon in just under four weeks time, both managers were reluctant to show their full hand. There were five changes for The Saints with Alfie Lewis, Jak Hickman, Shane Griffin, Billy King and Nahum Melvin Lambert all coming into the side from Friday's victory over Longford.

It was an entertaining start to the game and was end to end with both teams looking to grab themselves an early lead.

Chris Forrester went close when Matty Smith cut in and teed him up, but Forrester's snap shot dribbled harmlessly wide.
Moments later, Bohs broke on the counter. Ross Tierney did excellently but his pass had too much on it, making the angle too tight for Liam Burt who dragged his shot across the face of the goal and wide.

It didn't take the Saints long to settle into the game and 11 minutes in, they broke the deadlock. Andy Lyons' back-pass to goalkeeper James Talbot caused all sorts of problems for the goalkeeper and when he attempted to clear it, Billy King pounced on the loose ball. The Scottish native buried past a retreating Talbot to open the scoring on the night.

St Pats went for the jugular and Jak Hickman's cross two minutes later landed straight on the head of Matty Smith who beat Talbot but failed to beat the crossbar as it cannoned back off the woodwork with Jay McClelland's resultant shot glancing to the right and wide just after.

It was an electric start from The Saints and they could have had three by the half-hour mark, with Jay McClelland going closest to doubling the lead with an well taken free kick that had Talbot worried for a moment.

McClelland again went close to finding the net for his side's second of the night when he found himself free on the left, but his left footed thunderbolt blasted off the side netting and it was the last chance of the half as Rob Harvey's half time whistle brought an entertaining half to an end.

Whatever Alan Matthews and Stephen O'Donnell said to their players at half time, it worked wonders as just two minutes into the second half, St Pats finally doubled their lead. Chris Forrester set Jak Hickman free down the right side with a beautifully weighted pass and Hickman's low cross was bundled over the line by Jay McClelland to give The Saints a two goal advantage.

However, the two goal advantage did not last long as just six minutes after, Bohemians pulled one back. Paddy Barrett's misplaced pass set Ross Tierney free and the latter coolly slotted passed Viteszlav Jaros to throw the Northsiders a lifeline.

Keith Long rang the changes after the goal and substitute Promise Omochere who had just been introduced four minutes previous, equalised 64 minutes in. Tyreke Wilson whipped in a dangerous delivery and it was Omochere at the back post who reacted quickest and poked the ball home to level proceedings.

Bohs had all the momentum as they looked to push on and find a winner and they could have, but for some excellent goalkeeping from Jaros as he was on hand on a numerous occasions to get down and save some dangerous Bohemians' shots.

Ross Tierney went closest for the Phibsborough outfit when his dipping, swerving shot came back off the crossbar and was eventually cleared by some desperate St Pats defenders.

It set up for a grand-slam finish as both sides threw everything at the game in search of a winner. Robbie Benson's corner which sailed over everyone in the box almost crept in at the back post but it sailed agonisingly wide of the far post. Benson went close two minutes from time but he couldn't get the right connection as the ball trickled into the hands of Talbot in the Bohs goal and it proved to be the final chance of the game as spoils were shared in Inchicore.

Next up is another home tie against third placed Sligo Rovers on Friday evening in Richmond at 7.45pm.