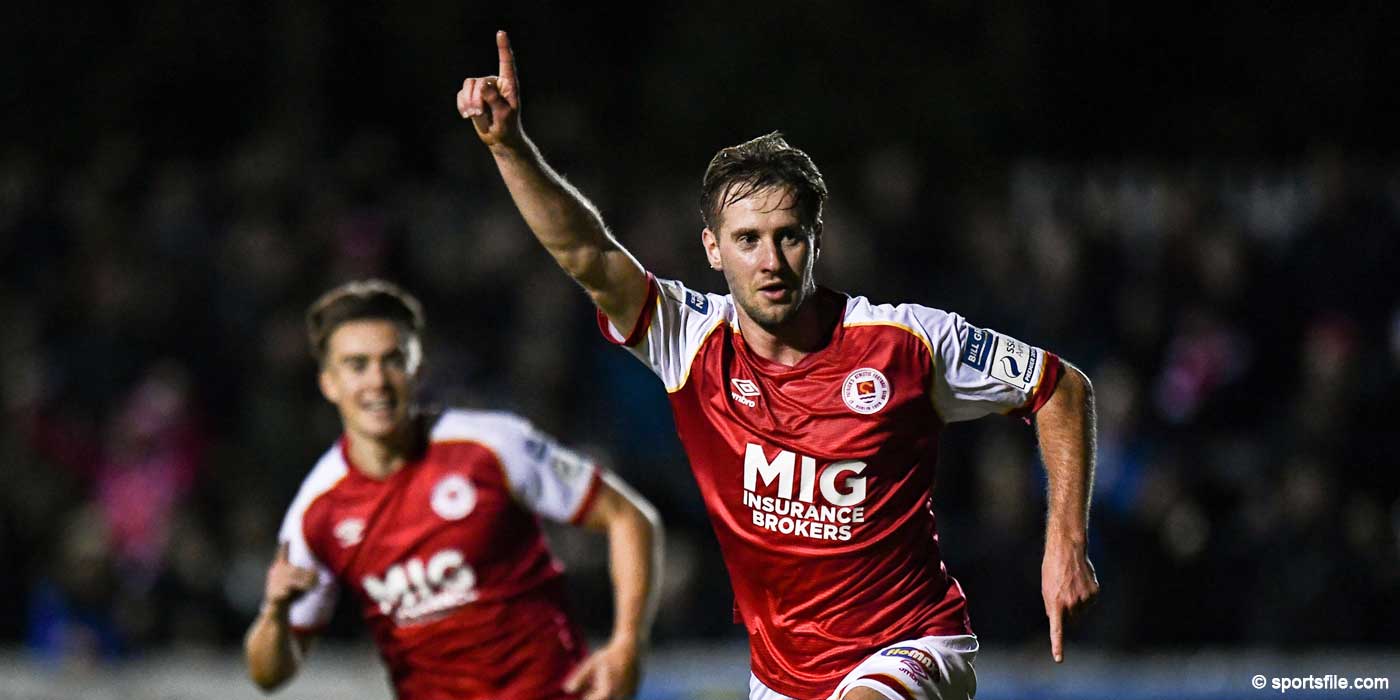 Ruthless, Relentless and in the end, Rewarded. St Patrick's Athletic are on their way to The Aviva after a 3-1 win over Dundalk at a full capacity Richmond on Friday evening. Goals from Billy King, Matty Smith and a sensational lob from Darragh Burns booked The Saints' place in the final, where they will take on Bohemians for a chance to reach the promised land for the first time in seven years.

Apart from the early Dundalk break, where Will Patching's tame shot was comfortably saved by Vitezslav Jaros, it was a rather quiet opening 20 minutes, and perhaps Sean Murray's shot which flew into the side netting was the best chance of a rather cagey opening quarter.

The Saints settled well into the game, with Darragh Burns in particular proving a handful for the Dundalk defence. On the 25 minute mark, Burns did terrifically to cut inside, but his goalbound effort was well blocked by Andy Boyle.

Moments later and with 27 minutes on the clock, The Saints found a breakthrough. Billy King pounced on a loose ball after a mistake from Greg Slogget. As King ran at the Dundalk goal at full throttle, he had one thing on his mind. His low shot, sailed past Peter Cherrie to give the Saints the advantage.

They had all the momentum by now and two minutes later, they almost doubled their lead. Billy King set Ian Bermingham free down the left hand side who was in acres of space, however, he was unable to direct his effort towards the goal and it drifted just wide of the target with Dundalk struggling to cope with the relentless St Pats pressure.

However, they weathered the storm and the leveled proceedings five minutes before the half time break. Will Patching won the ball back for The Lilywhites 25 yards from goal, and he expertly poked the ball through to Patrick Hoban who made no mistake in burying the ball past Jaros to equalise.

St Pats did win a free just before the half time whistle, with Alfie Lewis' free kick almost finding James Abankwah in the box, but it bypassed the crowd of bodies in the danger area and Cherrie's clearance was the last play of the half as referee Neil Doyle brought the curtain down on an open and entertaining first half.

Dundalk started the brighter of the two sides in the second and Patrick Hoban was inches away from netting home but it sailed by his outstretched foot.

11 minutes into the second half, The Saints took the lead. It was Burns again who found Matty Smith with a mouthwatering pass, and the latter smashed the ball home with a superb strike to restore The Saints' lead.

Just five minutes later, Billy King's lifted cross from the left hand side looked as if it had crept over Cherrie's head, but it went agonisingly wide of the Dundalk shot-stopper's post.

Chances did dry up for a large part of the second half as The Saints tried everything to hold onto their lead while Dundalk threw everything at the game, but were unable to break down a stubborn St Pats defence.

Will Patching's effort from distance on the half volley was the pick of the chances with his dipping thunderbolt needing the fingertips of Jaros to tip it over the crossbar.

85 minutes into the game, Darragh Burns topped off a sensational performance with a sensational goal. Ronan Coughlan did superbly to win back the ball, and he set Darragh Burns one on one. Burns showed unbelievable composure to calmly chip the ball over Peter Cherrie to all but book St Pats' place in the Cup Final.

Burns was called ashore two minutes from time to a rousing ovation from the crowd, a testament to just how good the 19 year old was on the night.

It was a party atmosphere in Richmond after Burns' goal and The Saints held on to book their place in the 2021 FAI Cup Final. The 5,000 fans were more than delighted with the result, and the pitch invasion after the game summarised the emotions of the St Pats fans as they look forward to a trip to The Aviva and will relish the opportunity of a lifetime.