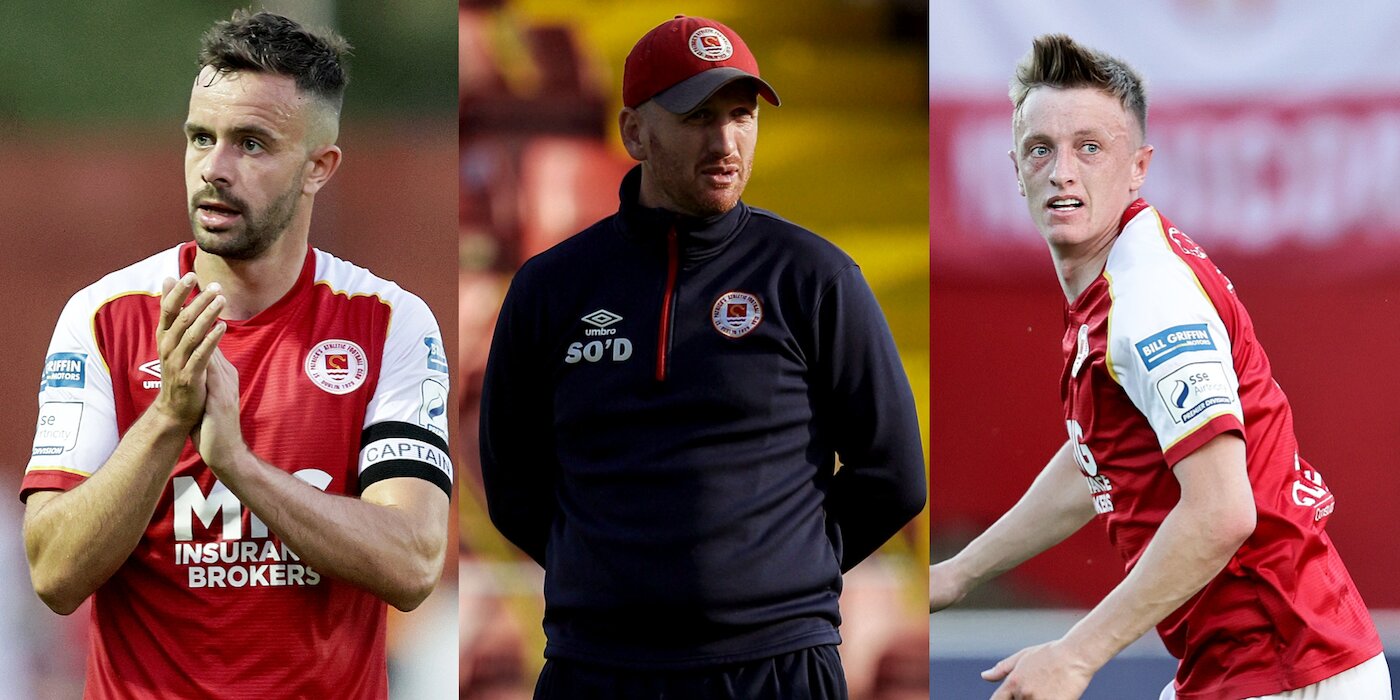 A huge night awaits in Inchicore on Friday as St Patrick's Athletic host Shamrock Rovers in a top of the table clash.

The game is sold-out with 2,500 St Pat's fans ready to roar the team on, in what will be the biggest crowd at Richmond Park since February 2020 when 2,807 fans attended last season's opening night fixture against Waterford.

Kick-off is at 7.45pm and the game will be live on RTE2 TV and the RTE Player worldwide, with the FAI Cup semi-final draw taking place after the final whistle.

The Saints booked their place in the last four of the cup on Friday night thanks to a 3-0 win against Wexford FC.

An eventful game that saw two red cards, one for each team, two goals from Darragh Burns and a penalty from Ronan Coughlan that ensured The Saints marched on, they'll face one of Bohemians, Dundalk or Waterford in the semi-finals.

But for now, it's full focus on Friday's derby against Shamrock Rovers.

The teams have met three times this year and The Saints are yet to register a win against their Dublin rivals.

In the first game of the season on the opening night, when Roberto Lopes turned Robbie Benson's cross into his own net in the 87th minute, it looked to have given St Pat's all three points, but Aaron Greene struck late on to grab a draw for Stephen Bradley's side.

There was similar late drama at Richmond in May. Chris Forrester's early goal was cancelled out by Graham Burke before half-time. It looked destined for a draw before Danny Mandroiu broke Saints' hearts with a last gasp winner.

Their last outing in July ended 3-1 to The Hoops at Tallaght. John Mountney levelled proceedings just before half time after Mandroiu had opened the scoring but two second-half strikes from Mandroiu again and Roberto Lopes ensured all three points stayed in Tallaght.

Shamrock Rovers were in league action last weekend, Rory Gaffney got the only goal in their 1-0 win away to Sligo Rovers.

Interestingly, St Pat's and Shamrock Rovers have each recorded the same amount of points this season (49) against all of the other eight teams in the league after three series of matches.

Speaking at a press conference during the week, Head Coach Stephen O'Donnell reflected on his sides meetings with Shamrock Rovers thus far this season:

"You always want to win no matter who you are playing against so you know Rovers are top of the league and the odds of them losing a lot of games are quite small, but we had three good games with them I felt. I think when both teams play, it's a good standard and good quality too.

At Richmond, I felt they might have shaded it. We went in level and then in the second-half, we were the dominant team, and it was a sucker punch with the last kick of the game. At Tallaght then, we were missing bodies and changed the shape a little bit. I thought we were the better time until they went one up and we equalised before half time and to be fair I thought they were the better team in the second-half, although they did score from a set piece to go 2-1 up.

It's a game we are looking forward to on Friday. They are always good games and it's great that there is a lot of meaning on it. It's great experience for our younger lads and our whole squad who haven't played in these types of games really."

O'Donnell was also asked about the importance of the game in the context of the title race:

"We have never really spoken about it (the title race) in those terms. We are going into the last quarter now and we have nine games left between the end of the season between the league and a cup semi-final to look forward to and that's basically what are looking it, it is the next game on our calendar. We are not going in saying it's a must win game. There has been a lot of unpredictable results this season in the league, so it is the ninth last game and it happens to be Shamrock Rovers at home. Obviously, it is a tough game, but a really good game for our lads to look forward to."

Top scorer Chris Forrester has been in excellent form for St Pat's this season. He has been speaking on Talking Saints - The Official St Patrick's Athletic Podcast and feels the home fans will make a huge difference on Friday:

"It will be intimidating for Rovers, especially for the wing-backs with the fans being right on top of the pitch and behind both goals, they can get on the goalkeepers a bit. Any player in the league will tell you Inchicore is a great atmosphere when the fans are packed out and the four corners will be full on Friday.

We want to be challenging for the league which we are now and when you see the fixtures with Rovers, you always know it's going to be a cracker of a game whether it's in Tallaght or Inchicore and I think the previous season and season and a half, we have good games against them so it's going to be a good game."

Robbie Benson spoke to us at an EA Sports FIFA 22 event on Wednesday ahead of Friday's big game:

"There is big excitement in the group. It's a huge game obviously, a top of the table clash and we are looking to show that we belong right there at the top. We haven't beaten Shamrock Rovers this year, so we are going to try and make that right on Friday.

If you had offered us this position at the start of the year, six points off the top, although Rovers' have a game in hand and to be in a cup semi-final, I would have bitten your hand off so it's a big game on Friday obviously.

We could win the game and not win the league or on the flipside, we could lose the game on Friday and go and win the league so it is not a make or break in that sense but obviously it is a big game in the season and probably one we will look back on whichever way it works out."

Team-news: John Mountney (knee) will miss the game with Lee Desmond (concussion) and Robbie Benson (quad), who've both missed the last couple of weeks, pushing to be available for selection.

Match Programme: You can download your free copy of 'The Saint' from our website on Friday morning

Where Can You Watch The Game: The game will be live on RTE2 and the RTE Player worldwide, with kick off at 7.45pm, Des Curran and Kenny Cummingham will be in the commentary box with Stuart Byrne and Richie Sadlier joining Darragh Maloney in the RTE studio.