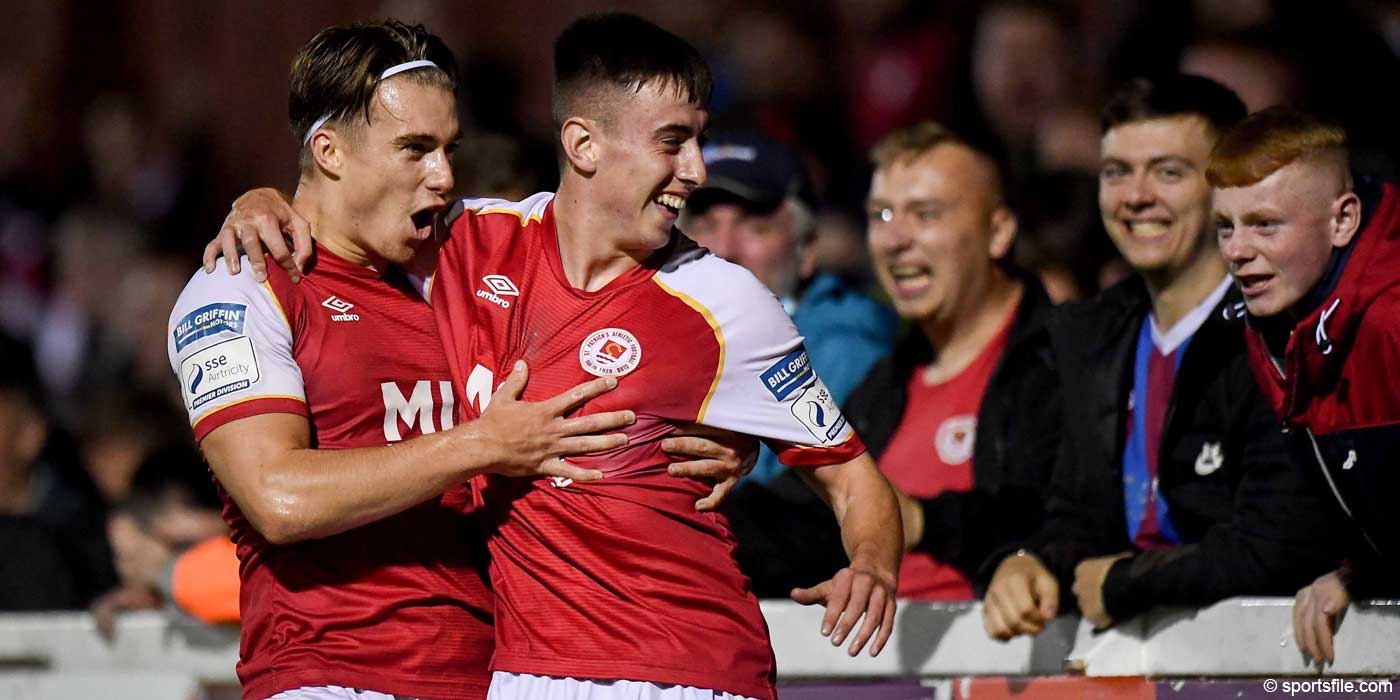 St Patrick's Athletic are just one win away from the cup final after a 3-0 victory against Wexford at Richmond on Friday night. An early Sam Bone red card did not affect the result as two goals from Darragh Burns and a late penalty from substitute Ronan Coughlan sent St Pats on their way to the semi finals.

There were two changes to the Saints side which were beaten in the league by Sligo last weekend with Jamie Lennon and Ben McCormack replacing Alfie Lewis and Ronan Coughlan.

It was almost a party atmosphere under the Friday night lights at Richmond, but the stakes were extremely high with a place in the semi finals up for grabs. It was tense on the pitch with both sides attempting to impose themselves on the game in the early stages.

The Saints enjoyed the majority of the possession in the opening exchanges as they looked to break down the Wexford defence, but seven minutes in, St Pats were dealt a hammer blow. A long ball from Wexford goalkeeper Jimmy Corcoran almost set Jack Moylan free. Moylan went down 30 yards from goal after a foul from Sam Bone and referee Derek Tomney rushed over and showed Sam Bone a straight red card.

Two minutes later, Moylan was almost set free again but his touch forced his back to goal. He did well to create space for a shot, but it was well blocked by Jamie Lennon. The rebound fell to Karl Fitzsimons, but he dragged his shot well wide of the St Pats goal.

It was a drama filled first half, and 20 minutes in, there was more controversy when Matty Smith was bundled over by Kevin McEvoy in what looked like a clumsy challenge inside the box, but Tomney waved the play on despite huge protests from the St Pats camp.

Moments later, Conor Crowley had the goal at his mercy at the other end, but he dragged his shot wide of the goal as Wexford looked dangerous on the break.

31 minutes in, St Pats finally took the lead. Paddy Barrett picked the ball up on the halfway line and he split the midfield with a neat pass to find Billy King. King turned and he split the defence with another neat pass which found Darragh Burns. Burns took it early and slotted it home past Corcoran to give The Saints a 1-0 lead.

Four minutes before half time, Wexford were reduced to 10 men when Conor Crowley was sent off for his second yellow. His first was after a push on Chris Forrester and Crowley's second was after a challenge on Matty Smith. There were no complaints from Smith, but Crowley was adjudged to have his studs up and received his marching orders with both sides now playing with 10 men.

In injury time of the first half, Burns had a chance to double the lead when Jimmy Corcoran's fisted clearance from a Jack Hickman cross fell kindly to Burns, but his shot sailed well over. It proved to be the final action of a first half, which was certainly not short of drama.

St Pats needed a good start to the second half and two minutes in, they almost had a perfect start. Chris Forrester played a wonderful long ball over the top to set Billy King up, but King couldn't direct his shot on target as the ball drifted agonisingly wide.

Soon after, Lorcan Fitzgerald's short free kick to Harry Groome set Groome up to hit a thunderbolt outside of the box, but his effort went well over Jaros' crossbar as Wexford looked to get themselves back into the game.

Despite a brave Wexford performance in the second half, it was the Inchicore men who doubled their lead after 62 minutes of play. It was Forrester again who was the provider as he played a wise ball through to Darragh Burns and Burns did excellently to open himself up and he slotted past Corcoran for a second time of the night with a side foot into the left hand corner.

Burns nearly got an assist for himself eight minutes later when his floated cross found Ben McCormack at the back post, but his header was straight at Corcoran in the Wexford goal who saved comfortably.

Wexford did create some decent chances for themselves in the closing changes when the game began to open up with Evan Farrell and Paul Fox both going close, but they were unable to break down another impressive St Pats defensive performance.

The Saints put the icing on the cake in injury when Chris Forrester was fouled inside the penalty area. Substitute Ronan Coughlan stepped up, and he converted the penalty to give them a 3-0 victory, as The Saints go marching on to the semi finals of the FAI cup, with one of Bohemians, Waterford and the winners of Dundalk and Finn Harps set to join them in the pot for the draw.

Next up is a top of the table clash with leaders Shamrock Rovers next Friday night at Richmond, with kick off scheduled for 7.45pm.