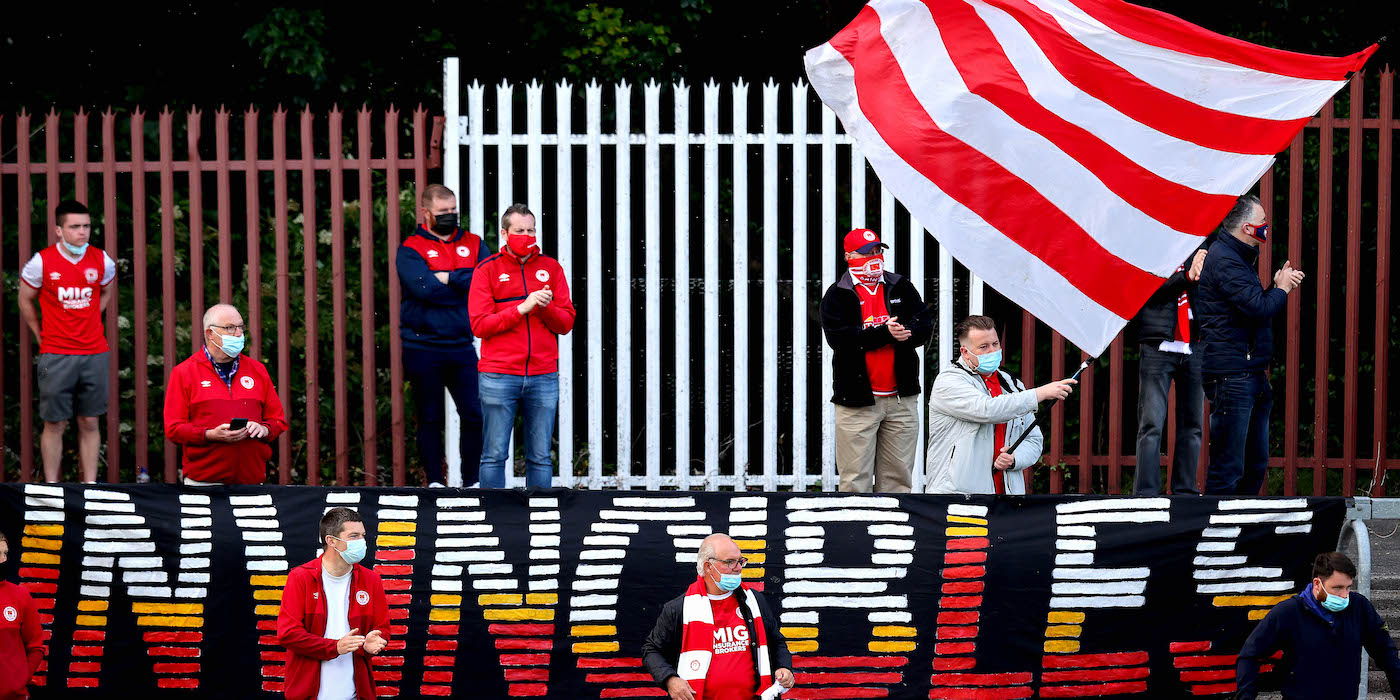 St Patrick's Athletic will welcome Derry City on Friday evening, with 500 supporters set to be in attendance at Richmond Park.

The Saints moved back to third after a defeat at the hands of Bohemians on Friday last.

An own goal from Andy Lyons after a Darragh Burns shot cancelled out Georgie Kelly's opener just before half-time.

Lee Desmond was then sent off for a foul on Ross Tierney which earned the Saints' defender his second yellow card. Tyreke Wilson curled in a brilliant free-kick to put the home side back ahead before Liam Burt with it 3-1 with a powerful shot.

St Pat's were then reduced to nine men when Captain Ian Bermingham was sent off but a late thunderstrike from Jay McClelland gave the away side hope in injury-time, but they were unable to find a dramatic equaliser.

Other results at the weekend mean St Pat's are now third in the table, three points off the top, with Shamrock Rovers in first place, just ahead of Sligo Rovers on goal difference.

Both sides are in European action this week meaning they will not play in the league this weekend, and so The Saints could find themselves back on top on Friday night, should they win against The Candystripes.

The sides have met twice this season, and The Saints are unbeaten against their opponents thus far.

They met back in April and goals from Robbie Benson and Darragh Burns' first ever senior league goal earned them a 2-0 victory.

They then met at the Ryan McBride Brandywell, and goals from Ronan Boyce and a Joe Thomson stunner overturned an early Lee Desmond goal and just as it looked as if Derry would take all three points, Billy King's late header snatched a draw as The Saints took a deserved point back to Dublin.

Head Coach Stephen O'Donnell has been looking ahead to the game knows that they will need to be at their very best:

"I felt when we played Derry the last time in Richmond, they had a real good character amongst the team, they worked hard with that sending off early on and it took us a while to break them down and they never gave up. Ruadhri (Higgins) had good decent players and it looked to me like a good group of players to work with when he came in.

Obviously they have strengthened in the last week or so since the window has opened, so they are not resting on their laurels and they obviously see it as an opportunity to do something between now and the end of the season with the acquisitions they have made so it's going to be a really tough game.

Like every game is, we are not at a level where we can drop off 10/15% and still expect to win games, we have to be proper at it and treat every opposition with the utmost respect to get anything from the game which we will this week."

There will be an increase in the number of fans allowed attend on Friday night, with 500 supporters set to pass through the Richmond turnstiles, and O'Donnell and the players can't wait for it:

We are more than doubling that, going from 200 to 500 so we are looking forward to getting them back in on Friday. No doubt, they have been so starved of live action for so long so they are really going to get behind the team and that makes such a difference for the intensity, confidence and adrenaline of our players when they are behind us and it really does spur us on."

Team-News: Lee Desmond and Ian Bermingham are both suspended as their respective red cards last weekend, Shane Griffin is recovering well from his shoulder injury but will miss the game

Where Can You Watch The Game: The match will be live on LOITV, kick-off is at 7.45pm with coverage beginning at 7.15 with Jamie Moore, Ger O'Brien and Conan Byrne