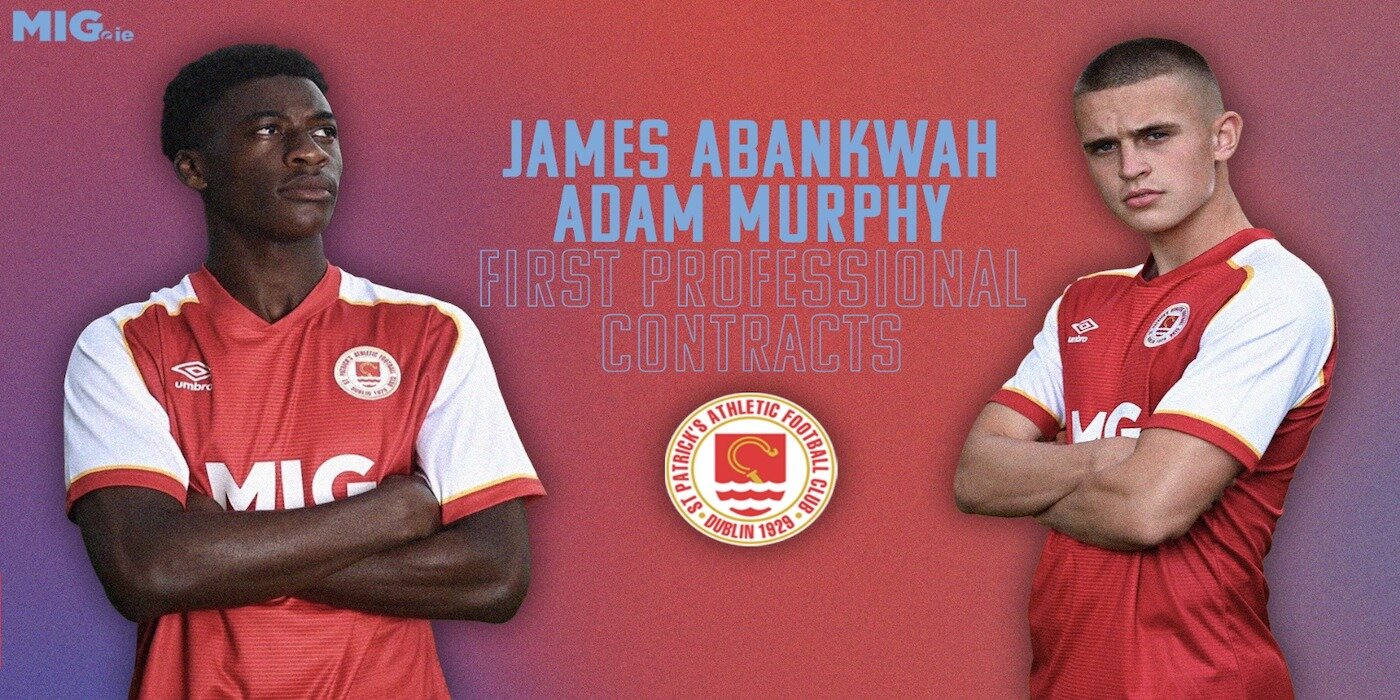 Teenagers Adam Murphy (16) and James Abankwah (17) have both signed their first professional contracts with the club.

It follows yesterday's news that Darragh Burns and Ben McCormack (both 18) had put pen to paper on contract extensions.

Both players were on the bench for the first team for the first time last Friday night, they'll both combine education with full-time training with our first-team and are both still able to play underage football for the next number of seasons.

Adam joined the club from Belvedere in January 2020 and featured for our U15s and U17s last season, born in 2005, he is eligible to play for our U19s for four more seasons!

James signed from Cherry Orchard in January 2019, he won a league and cup double at U15 level in his first season, before winning the U19 league title three days before Christmas last year, playing three years above his age-group! He can play U19s for three more years!

"They are both top prospects. James has done really well, he's been playing for the U19s and training with us for the last few weeks, he's fitted in really well. Adam has been in with us at any opportunity available and he's done very well.

They are still developing but they've been very much at home with us and have been really impressing in training. They both have very good attitudes and we are looking forward to helping them continue their development."

"It's a really proud moment for me and my family to sign my first professional contract at the age of 16, St Pat's is where I wanted to sign and I'm really happy that they've seen the potential in me to offer it."

He also knows the importance of completing his Leaving Cert:

"I'm very grateful that St Pat's have given me the opportunity to move to a private school to continue my education and do full-time training. Education is very important to me and I feel that the institute will help me a lot."

Abankwah is also excited to begin his professional career:

"I'm delighted and ready to go, I'm buzzing really. It was a very good feeling to sign, myself and my family are really happy.

It's a big step up, the first team players are all really good and the players are quite physical, the match-day experience on Friday was brilliant and hopefully there is more to come."

While Academy Director Ger O'Brien has been outlining the potential in the lads:

They feel like they can make an impact just like Darragh Burns and Ben McCormack have done, we feel like we've got two fantastic players coming through in Adam and James."

The contracts from Adam and James and new deals for Darragh and Ben, means that nine current academy players or academy graduates are currently on professional contracts in our first-team squad.

The most notable of those is Jamie Lennon, who progressed from our U19s into the first-team, he played his 100th senior game for the club last month.

Josh Keeley and Kian Corbally signed their first professional contracts in January, along with Cian Kelly and Kyle Robinson (both currently on loan with Wexford)

A number of other academy players have been in first-team match squads and training in recent weeks.

Interviews with Adam, James, Stephen and Ger are on our Youtube channel.