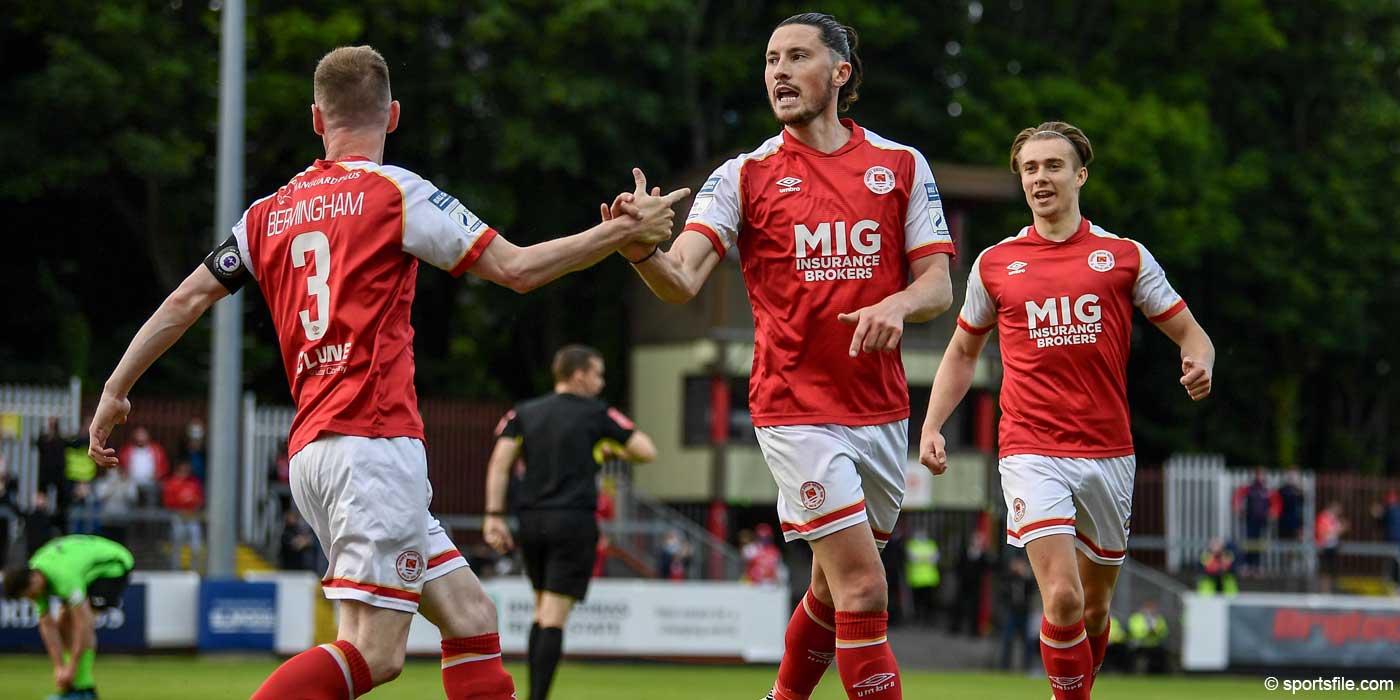 St Patrick's Athletic moved to top of the table, level on points with Shamrock Rovers with an impressive 4-1 victory over Finn Harps on Monday evening. Two Ronan Coughlan goals either side of half time a Robbie Benson strike and a sensational finish from Alfie Lewis helped The Saints claim victory in what was probably their most impressive performance of the season in front of 200 Saints fans.

Anchored by another brilliant Lee Desmond performance, a first half goal from Ronan Coughlan laid the foundations as The Saints pushed on in the second half to leave them at the summit after the first 17 games.

Played under beautiful conditions in Richmond, the home side were first to create a decent chance. Alfie Lewis whipped in an early free kick and John Mountney found himself free at the back post, but he was unable to direct his header goal bound as it drifted just wide.

The early stages were end to end as both sides looked to gain the upper hand. Moments after Mountney's header and at the other end, Conor Barry's free kick came back off the wall and his attempt at goal from the rebound flew into the side netting.

It was a scrappy opening 20 minutes, with both sides struggling to create any clear cut chances. However, 21 minutes in, Jaros was tested for the first time. Barry McNamee's attempt at a shot was blocked and the rebound fell kindly to an incoming Ethan Boyle who connected beautifully, but Jaros got down well to palm the shot away.

37 minutes in, The Saints nudged themselves in front. Alfie Lewis, who had an impressive first half capitalised on a loose ball down the left hand side. He put his body on the line, winning a ball in the air and his low cross found Ronan Coughlan in the box. Coughlan had his back to goal and was surrounded by Harps defenders but he somehow managed to create a sight at goal for hinmself and he unleashed a left footed rocket which flew past Mark McGinley in the Finn Harps goal to give the home side the lead just before half time.

Robbie Benson's in-swinging corner, which was smartly tipped away by McGinley and it proved to be the final action of the half as referee Rob Harvey drew the first half to a close with The Saints taking a one goal lead in at half time.

The Saints started the brighter of the two in the second half and enjoyed some long spells of possession and 61 minutes into the game, they were rewarded for their efforts. Lewis played the ball in field to Coughlan who in turn played a beautifully weighted pass through to Robbie Benson. Benson showed some terrific footwork and composure to turn back onto his trusted left foot and he calmly slotted past McGinley to double The Saints lead just after the hour mark.

Benson almost had a second three minutes later, when a delicious cross from substitute Darragh Burns found him free at the back post but his effort sailed right across the face of the goal and away from the danger area.

With The Saints now in control, it took only six minutes for them to find the net for the third time, and it was Burns again who was the provider. He chased down a seemingly lost cause and did excellently to recover possession. He floated another delicious cross into the danger area and this time it found Coughlan who buried to the net for his second of the evening and his fourth goal in three games.

Finn Harps fought back and they pulled one back 71 minutes in. Barry McNamee played a neat ball through to Adam Foley, who did very well from a tight angle to beat an onrushing Jaros in the St Pats goal to hand his side a lifeline with just under 20 minutes left to play.

Despite conceding, it was the Saints who looked the most likely to score and they could have had a fourth only for some last ditch defending from Finn Harps and a close range Mattie Smith header which sailed over the bar after Coughlan had headed the ball back across the area.

Four minutes before time, The Saints had a fourth and it was a sensational goal. Chris Forrester split the defence with a delightful ball through the middle and found Lewis through on goal. Lewis still had plenty to do and he finished emphatically with a delightful lob over McGinley to round off a terrific team performance and continue their unbeaten start since the restart.

Next up is a tricky assignment away to Waterford on Friday night as The Saints will look to build on an impressive first three games back after the mid season break.