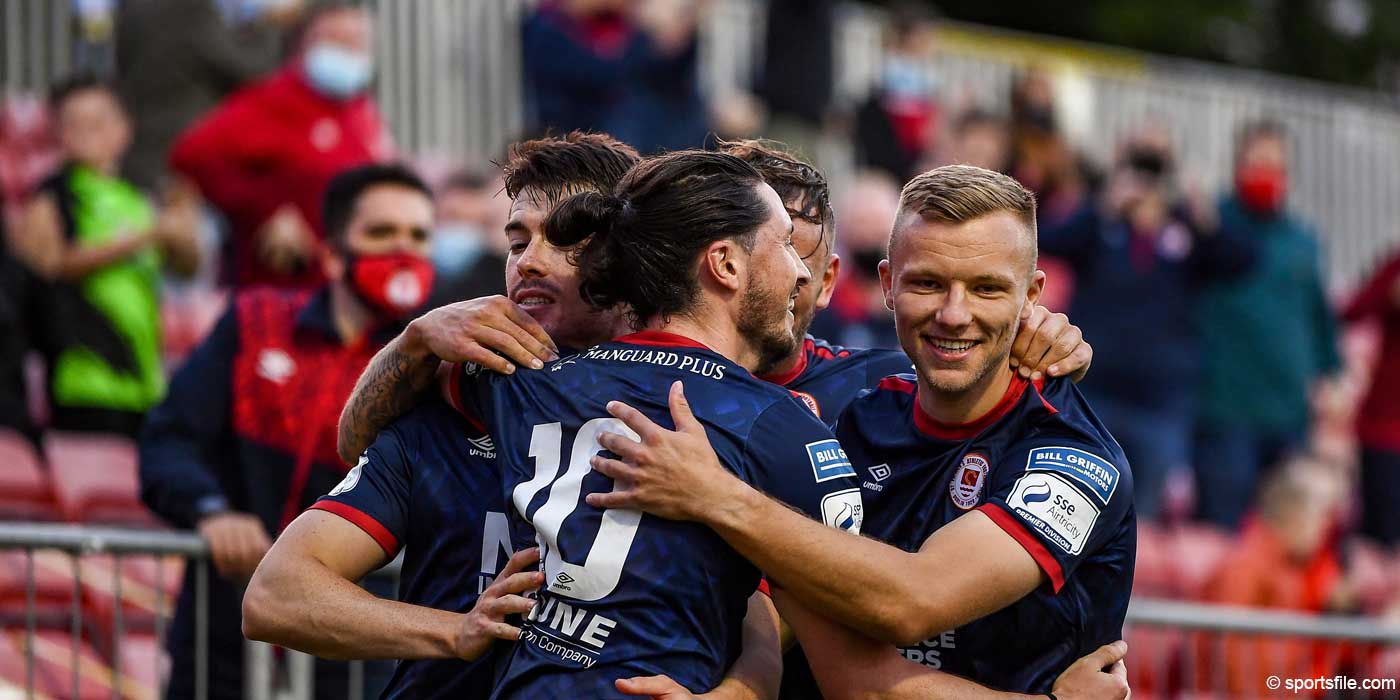 St Patrick's Athletic moved up to second in the table as they recorded a 2-0 victory on Friday evening at Richmond Park.

It was a near perfect performance from St Pats in front of 200 Saints fans, who returned to Richmond for the first time in 470 days.

An early Mattie Smith strike and a second half Ronan Coughlan penalty against his former club powered The Saints to a 2-0 victory.

With no changes to the side who beat Longford last weekend, The Saints started the on the front foot and just seven minutes in, they had their dream start.

Alfie Lewis did superbly to disposes Jordan Gibson on the edge of the area. The ball fell kindly to Robbie Benson and his attempted chip pass to Ronan Coughlan was headed away by the Sligo defence, but only as far as Mattie Smith, who made no mistake from six yards out, burying the ball past Ed McGinty to give the Inchicore men an early lead.

It was constant pressing from The Saints in the opening 20 minutes, with Billy King, Chris Forrester and Coughlan leading the press with relentless energy.

Just on the 20th minute mark, The Saints almost doubled the lead after a period of intense pressure. Smith connected beautifully and unleashed a powerful volley inside the area, but his volley was well blocked by Sligo defender Lewis Banks as the shot looked destined for the back of the net.

Nine minutes later, The Saints had another huge chance to double their lead. Benson broke forward and played his pass out wide to Billy King. King cut in and did well to create space for a shot inside the six yard area, but the shot was hit straight at McGinty and subsequently cleared.

Ronan Coughlan was next to go agonisingly close. Paddy Barrett was fouled in front of goal right on the edge of the area. Coughlan stepped up to take the free kick and his powerful free kick grazed the wall which knocked it inches over the bar as they looked to capitalise on a dominant first half performance.

Mattie Smith had half a chance when he blazed his shot over in added time, but The Saints carried a one goal lead into the half time break as referee Paul McLaughlin brought an entertaining half to an end.

Sligo Rovers came racing out of the blocks after the half time break, and five minutes into the half, they created their first real chance of the game. Former Saint Jordan Gibson broke at pace and played the ball in field to Romeo Parkes. Parkes teed Mark Byrne up on the edge of the box but his deflected shot sailed inches wide of Jaros' post.

Minutes later, there was danger when Greg Bolger's delicious pass over the top found Parkes racing through on goal, but Parkes touch took it away from the goal, and the defence recovered well to eventually clear their lines.

71 minutes in, and The Saints finally doubled their lead. Smith and Coughlan pounced on a loose touch from a Sligo defender in middle of the field. The rebound fell into the path of Coughlan who broke forward. Despite being fouled, Coughlan still managed to poke the ball forward to set Smith free. When Smith attempted to turn back inside the penalty area, Greg Bolger's sweeping tackle took the legs from under Smith, and McLaughlin pointed to the penalty spot.

Coughlan stepped up to take the penalty and he calmly slotted past his former teammate to give The Saints a two goal cushion, with just under 20 minutes left to play.

Sligo did pour bodies into the penalty box in search of a way back into the game but it was St Pats' night in Inchicore as they held on to claim an important three points and replace Sligo in second place on goal difference.

It's a quick turnaround for St Pats as they are in action again on Monday evening when they welcome Ollie Horgan's Finn Harps to Richmond as they look to build on an impressive restart after the mid season break.