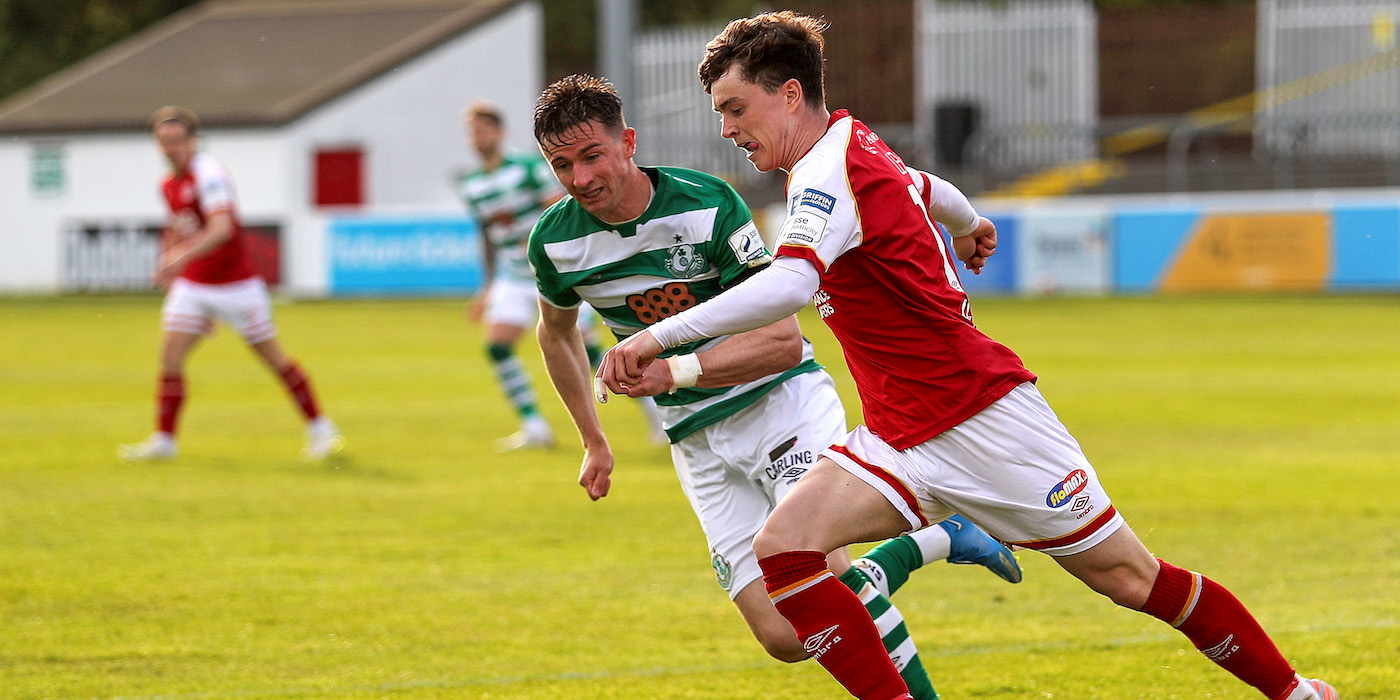 St Patrick's Athletic's unbeaten start to the season came to an end on Saturday evening as Danny Mandriou's goal snatched victory for Shamrock Rovers right at the death.

Chris Forrester's early strike was cancelled out by Graham Burke just before half-time before Mandriou struck with a cruel blow to break Saints' hearts in the 93rd minute.

There was one change to The Saints side which drew with Sligo on Monday, as Alfie Lewis replaced Paddy Barrett.

It was a beautiful evening for football with the sun shining down on Richmond Park with the conditions allowing for an open and entertaining game of football.

The Saints started the better of the two sides and were rewarded just four minutes in. Billy King did well in the corner on the right side, he recycled to John Mountney who delivered a pinpoint cross to Chris Forrester who buried the ball on the half volley past Alan Mannus to give the Saints the perfect start.

Three minutes later, and St Pats' worked another brilliant chance. Sam Bone's ball out wide found Forrester down the left channel. Forrester raced towards the goal and his neat back flick to an overlapping Ian Berminghan set him up to deliver a dangerous cross right across the danger zone, only for a Rovers defender to clear off the line.

Shamrock Rovers did have a glorious opportunity to equalise on the 20-minute mark, and when Rory Gaffney raced clear one on one with Vitelsav Jaros, he looked certain to score but Jaros got down brilliantly to deny to Rovers attacker.

They had another brilliant chance to equalise 38 minutes in. Jaros' first save fell to the feet of Ronan Finn, but the Liverpool loanee recovered excellently to make a point blank save.

Burke cut in on his left foot and his effort from outside the area made its way through a crowded penalty area and into the bottom corner.

Mandriou had a half chance in injury time of the first half, and his effort from 30 yards stung the hands of Jaros who did well to tip it over the bar. The resultant corner proved to be the final play of the game as the teams went in level at the break, ending an entertaining first half.

It was the Saints who started the brighter in the opening exchanges of the second period with Lee Desmond's header going over the bar after a Forrester free kick before Billy King's beautiful pass split the Rovers defence, and almost set Ronan Coughlan through, but Lee Grace did well to recover and clear the ball away.

65 minutes into the game and Rovers did have the ball in the net, but it was subsequently disallowed for offside. Finn's half volley found Gaffney at the back post, but he was offside as he bundled the ball home.

Chances were plenty as both sides went in search of a winner.

Matty Smith raced onto a ball over the top, but his shot was saved by Mannus. Moments later, Coughlan drilled his effort from just outside the box over the bar.

Meanwhile, at the other end, Mandriou's free kick took a huge deflection, but Jaros was on hand to make an impressive save.

As the game entered the final quarter, it was The Saints who looked the liveliest, and nine minutes from time, they had a chance to grab the winner. Sub Ben McCormack headed a long ball back across the area and Matty Smith almost squeezed the ball in but Mannus got down well to tip it around the post.

It looked as if points would be shared at Richmond, but Mandriou raced through on goal right at the death and squeezed the ball past Jaros to snatch victory for Rovers and end St Pats' unbeaten start to the season.

Next up for The Saints is a trip to Drogheda with a kick off time of 7.45pm next Friday evening.