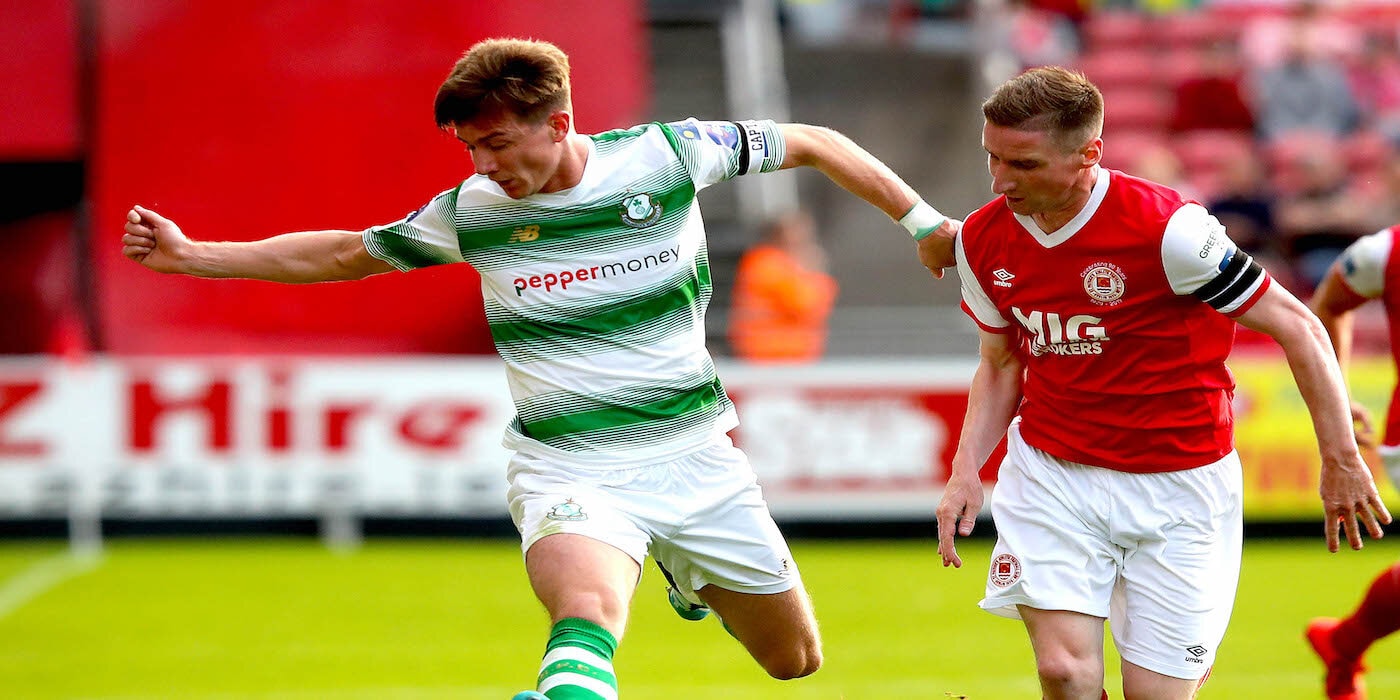 It's Dublin Derby day on Saturday as St Patrick's Athletic welcome Shamrock Rovers to Richmond Park for a 6pm kick-off.

Both sides are unbeaten, with the Saints enjoying a brilliant start to the season, picking up 21 points from a possible 27.

They continued their unbeaten run on Bank Holiday Monday at The Sligo Showgrounds in the most dramatic of fashions.

Darragh Burns delivered a dangerous corner deep into injury time, and it was Captain Ian Bermingham who rose highest in the box to head home and secure a deserved point for the Saints in what proved to be the final play of the game in the 95th minute. Former Saint Jordan Gibson had given Liam Buckley's team the lead from the penalty spot.

That made it six wins and three draws in the first series of matches for St Pat's.

Shamrock Rovers made it a record 30 unbeaten league games on Monday thanks to a 3-0 win over Waterford.

They have started well this season with seven wins and two draws and sit two points ahead of St Pat's at the top of the table.

The sides met each other on the opening evening of the new campaign and shared the points in Tallaght.

Roberto Lopes' late own goal from a deflected Robbie Benson cross looked as if it had snatched victory, but Aaron Greene responded 90 seconds later to equalise and ensure that the spoils were shared.

Remarkably, since that game in March, both teams have remained unbeaten and are the only two teams in the Premier Division who have not lost after the first series of games.

The last four league meetings between the teams have been draws.

Head Coach Stephen O'Donnell is aware of the type of performance needed on Saturday evening.

"We know going in when you play Shamrock Rovers, you are going to have to be at your best or somewhere very close to your best to get something from the game. We also know that we have good players too so they're the games you look forward to as a coach and as a player, you look forward to pitting your wits against the best teams."

Ian Bermingham was the hero last weekend, when his 95th minute header snatched a late draw against Sligo.

Shamrock Rovers are a familiar opponent for him and looking ahead to the game, he and the rest of the squad are 'buzzing' for the challenge:

"It's a big game. They are all big games in the league. Obviously, Rovers is a Dublin Derby and they're classed as rivals so it's a big game. The players will all be up for it on both sides and it's a top of the table clash. We probably haven't had one in a while so we are all buzzing for it and we can't wait to get going.

We've got to enjoy it and go and embrace it and take the game on its merits and we will be at it Saturday. We are looking forward to it, it's a big game, it's a Dublin derby so we will be right for it."

Lee Desmond has been a rock at the back this season and has caught the eye of many during the first series of games.

The win over Longford Town last weekend was his 200th competitive game for the club at the age of just 26.

Looking ahead to the first match of the second series tomorrow, Desmond is expecting a tough challenge:

"It's going to be very tough. They had a good win again against Waterford on Monday. There's going to be times when they'll go and dominate the ball and we know that, but I think we have to start well because they're a team that will punish you, but we know we can win too and we have the players to do that.

We are unbeaten against them since Stephen O'Donnell has come in, there has been four draws in the last four games so they know they will come up against a good defensive side, but we will create chances up the other end too and we are looking forward to the game."

Team-news: Cian Kelly (foot) remains out, the medical staff will access the rest of the squad after training today with everyone else expected to be available for selection.

Where Can You Watch The Game: The game will be live on WATCHLOI, with a kick-off time of 6pm on Saturday evening. Des Curran and Ger O'Brien will be on commentary duty.