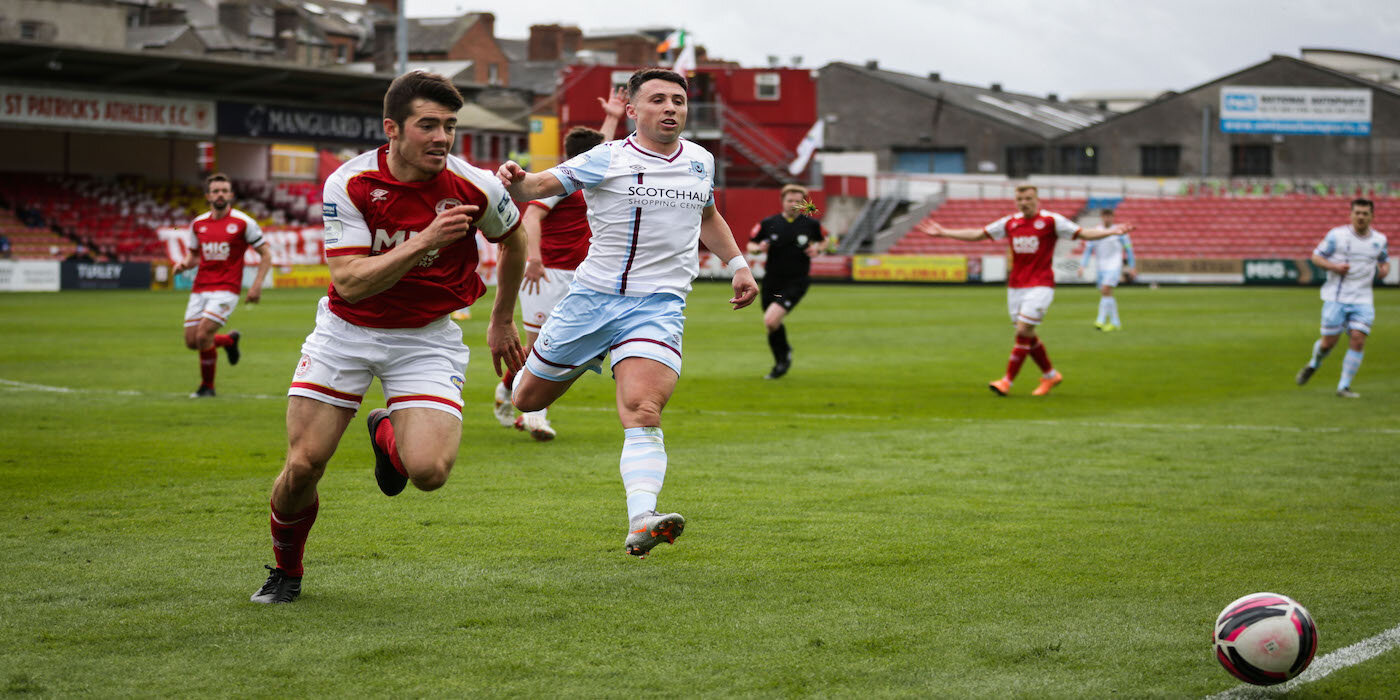 St Patrick's Athletic will travel to Ballybofey on Friday evening to take on Finn Harps in their third of the week.

The Saints are unbeaten in the league so far, having won four and drawn two of their opening six games.

Darragh Burns scored his second consecutive goal at Richmond Park on Tuesday evening after just 90 seconds. That early strike was enough to claim all three points in a 1-0 win over Waterford.

That victory followed last Saturday's 1-1 draw away to Dundalk at Oriel Park.

The team recovered in the sea on Wednesday morning before returning to the training pitch today ahead of tomorrow's long trip North.

Ollie Horgan's team have enjoyed a good start to the season themselves. Harps have lost only one of their opening six games, a start which has included wins over Dundalk and Bohemians. They currently sit 4th in the table, having drawn 0-0 with Longford Town on Tuesday evening.

Just three points separate the teams after six games of the new campaign.

The teams met twice in the league last year. The Saints recorded a 2-0 win in their home fixture before falling to a 3-2 defeat at Finn Park in the return game.

They also met in the first round of the FAI Cup and it was the Donegal men who progressed to the next round after an early Ryan Connolly goal was enough to see them through.

Head Coach Stephen O'Donnell has been looking ahead to tomorrow's 5.45 kick-off.

"It's a very quick turnaround from the Waterford game. Finn Harps are in the same boat they played Longford Town on Tuesday evening too. We know we need to be at our very best, Finn Harps have had a great start to the season. It's always a tough place to go but we are looking forward to the game.

They beat us twice last season. They beat us in the cup and then 3-2 in the league near the end of the season so it's always a tough game. They've started brilliantly so we are under no illusions the task ahead of us on Friday evening."

Lee Desmond is now in his 7th season at the club, he is our second longest serving player after Captain Ian Bermingham.

The 26-year-old has been an ever present at the heart of the Saints defence this season, and is looking forward to the trip to Donegal tomorrow.

"Finn Harps have started the season very well and we know we are in for a very difficult match up there. It will be a different type of game then some of the games so far in terms of their physical challenge. They are a tall side too so thatÃƒÂ¢€Ã¢â€žÂ¢s something we'll have to deal with too. I'm expecting a proper old-school battle to the honest.

They have added quality players over the last couple of years, the likes of Barry McNamee and Dave Webster who I played with at St Pat's. They have got quality and they also haven't lost that fighting attitude that they've always had. We are in confident form ourselves though and weÃƒÂ¢€Ã¢â€žÂ¢ll travel up with the intention of winning the game."

West Ham loanee Alfie Lewis made his first league start for us on Tuesday night, watch his interview on our Youtube channel

Team-News: Cian Kelly (foot) and Jay McClelland (knee) will both miss the game

Where can you watch the game: The game will be live on WATCHLOI, with an early kick off at 5.45 on Friday evening.