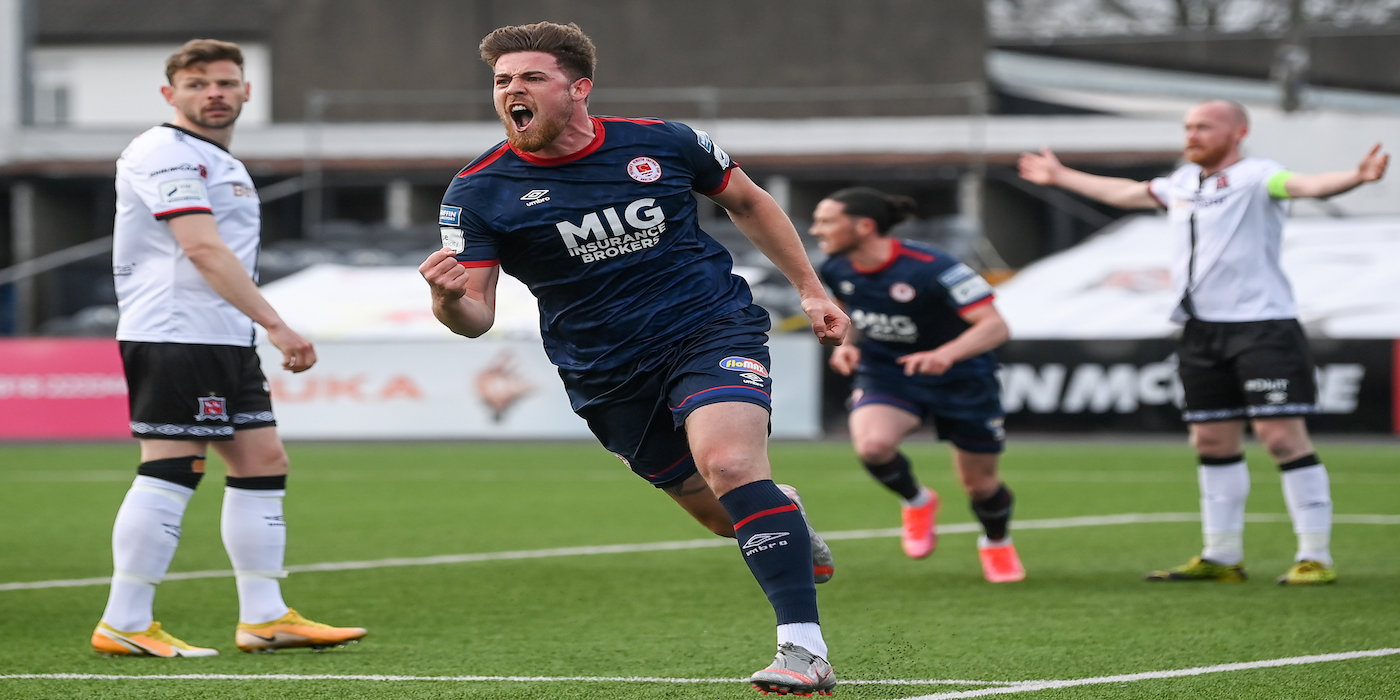 It was honours even at Oriel Park on Saturday night as Sam Bone's opener was equalised by Junior Ogedi-Uzokwe.

The Saints took the lead through Bone's bullet header in the 56th minute, former Dundalk man Robbie Benson got the assist from the corner.

The equaliser came with just five minutes remaining, second-half substitute Junior bundled home at the back post to earn his team a share of the points.

The Saints started in their usual fashion, applying early pressure and they had a half-chance when Alessi Alibi's clearance fell to Billy King on the edge of the area, but his shot was blocked well by Daniel Cleary.

Chris Forrester did deliver some dangerous corners into the box early on, but the Dundalk defence were alert in clearing their lines.

It was 15 minutes before either team created a real chance, and it came the way of the Inchicore men.

King turned provider this time, and he teed up Robbie Benson, but he was unable to hit the target as his shot sailed over the Dundalk crossbar.

Viteslav Jaros had to be alert on a couple of occasions to deal with some high balls in the area, and a glancing header from Patrick Hoban, but Jaros dealt with the danger adequately.

There were five additional minutes at the end of the half due to injures for Midstkogen and Dundalk keeper Abibi, and the first half eventually ended with either side able to find the breakthrough.

Six minutes into the second half, Ronan Coughlan had a good chance to put the Saints ahead. He found himself free inside the box in front of the Dundalk goal, but his driven shot was straight at Abibi who got down to save well.

The Saints took the lead in the 56th minute.

Robbie Benson's perfect corner found Sam Bone who headed the ball into the back of the net, his first goal for the club.

Dundalk did enjoy a purple patch following the goal, and 73 minutes in, they had their best chance of the half. Patrick Hoban delivered a ball, and as it bounced around, it fell to Chris Shields in the area, but his snapshot drifted just wide.

Immediately after Shields' chance, Billy King almost doubled The Saints' lead in spectacular fashion. Mountney played a ball in field to King, who flicked it up, turned and unleashed a rocket with his left foot forcing Abibi into making an excellent save as the game entered the final 15 minutes.

King was a constant thorn to the Dundalk defence after his introduction, and he had another huge chance eight minutes from time. Chris Forrester made a piercing run at the Dundalk defence, and made a neat pass in behind to King, but the latter was unable to divert the ball into the net from a tight angle.

Dundalk's pressure pay off, and five minutes from time, they found an equaliser.

Michael Duffy drilled in a cross from the left-hand side. The ball bounced around the danger area, and it was substitute Junior Ogedi-Uzokwe who reacted quickest to the loose ball as he slid in and squeezed the ball past Jaros to equalise for The Lilywhites.

Both sides searched for a late winner, Paddy Barrett made a spectacular tackle to take the ball off the feet of David McMillan as McMillan looked certain to score.

Immediately after, Barrett was on hand again to clear off the line as the sides shared the points.

The action continues during the week with a home match against Waterford at Richmond Park before Friday's trip North to face Finn Harps.