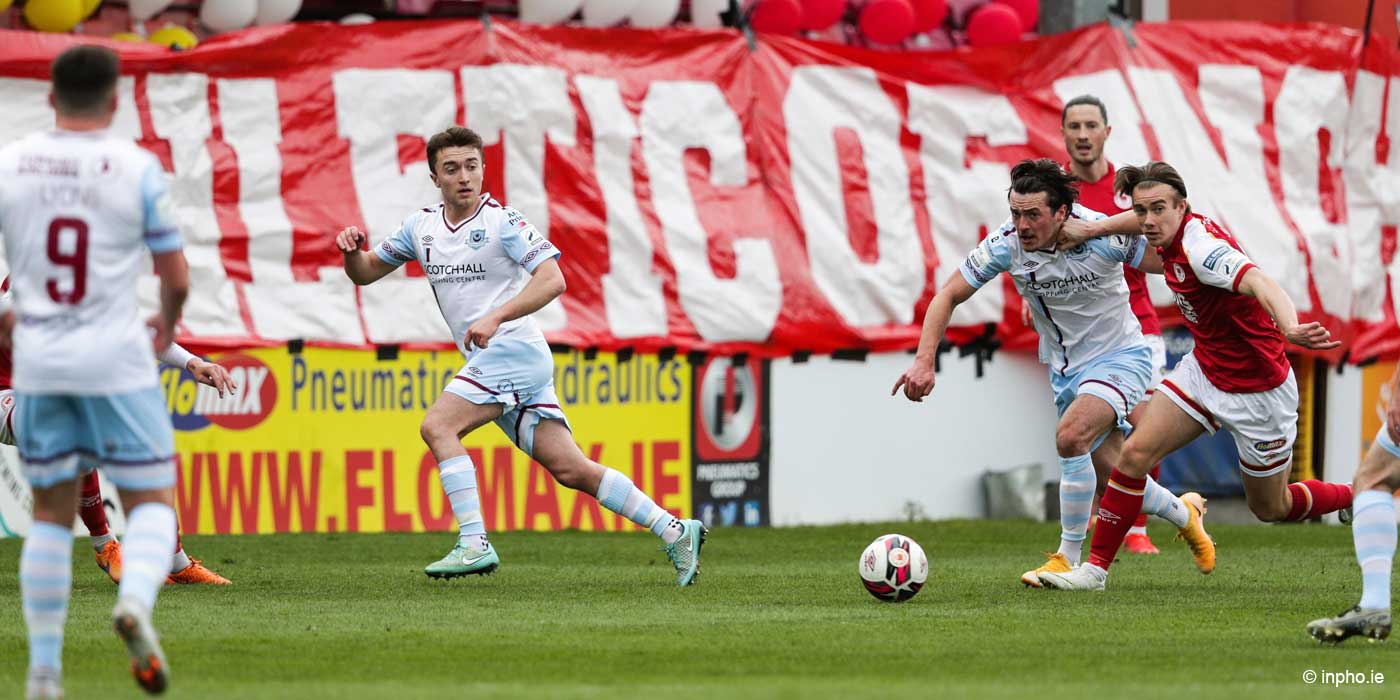 There were dramatic late scenes at Richmond Park on Saturday evening as St Patrick's Athletic picked up their first three points of the campaign with a 2-1 victory over Drogheda United.

The game looked destined for a draw, however, it was substitute Billy King who arrived at the back post in the 89th minute to secure all three points for the Saints.

The Saints started on the front foot, and attacked at a tenacious pace, testing the Drogehda defence early on and were almost rewarded inside the first six minutes. Jason McClelland did find space on the right, but his right footed shot drilled into the side netting.

St Pat's were enjoying a lot of possession, especially on the right side and they looked to utilise this as much as possible in the opening exchanges. McClelland and John Mountney both looked dangerous on the right. Robbie Benson also drifted out to the right, and a drilled cross found Matty Smith, but his shot deflected and was comfortably gathered by David Odumosu in the Drogheda goals.

Smith had a half chance 60 seconds later. A corner from Benson fell at his feet, but with his back to goal, he was unable to generate any power behind the shot as Odumosu gathered comfortably again.

Drogheda chances were limited inside the first 20 minutes, but they did create a half chance 16 minutes in. Darragh Markey whipped in a cross, which was met by a towering Mark Doyle, but his header sailed over Viteslav Jaros' goal.

Chances were rare for the remainder of the half, with the Saints looking the most threatening, but were unable to find a way past the Drogheda defence.

The Saints started the brightest again in the second half, and just one minute in, had a huge chance to open the scoring. Some neat work from Matty Smith inside the Drogheda penalty area teed up Robbie Benson in the six yard box, but his shot blazed over the crossbar.

Smith, who had now moved to a more central role grew into the game, and nine minutes into the second half forced Odumosu into action again. A low drilled shot from just outside the box was adequately dealt with by the latter, as he got down well to his right.

58 minutes in, and St Pats were finally rewarded for their possession. Benson found space on the left and delivered a dangerous cross into the box. The ball bounced around the penalty area, and it was Ronan Coughlan who pounced quickest placing the ball to the net, netting his first goal for The Saints.

However, that lead lasted just eight minutes. Jaros mishandled a stinging Mark Doyle shot from the left, and the ball fell to substitute Daniel Corcoran who slotted into an empty net, with the goal coming completely against the run of play.

As the rain descended on Inchicore, chances dried up, although it was Jaros who was the busiest of the keepers in the final quarter. He dealt with a couple of crosses adequately, before a brilliant point blank save in the 85th minute denied Drogheda of snatching all three points.

Right at the death, it looked as if points would be shared, but Billy King had other ideas. An 89th minute Ronan Coughlan shot from just outside the box cannoned off the post and out to the left. Darragh Burns did terrifically to chase down Conor Kane. He retrieved brilliantly and delivered a super ball to the back post, where Billy King was on hand to bury the ball into the net, giving St Pats a priceless late lead.

Drogheda did go in search of a late equaliser, but the Saints held on, earning them a deserved three points, their first of the season.