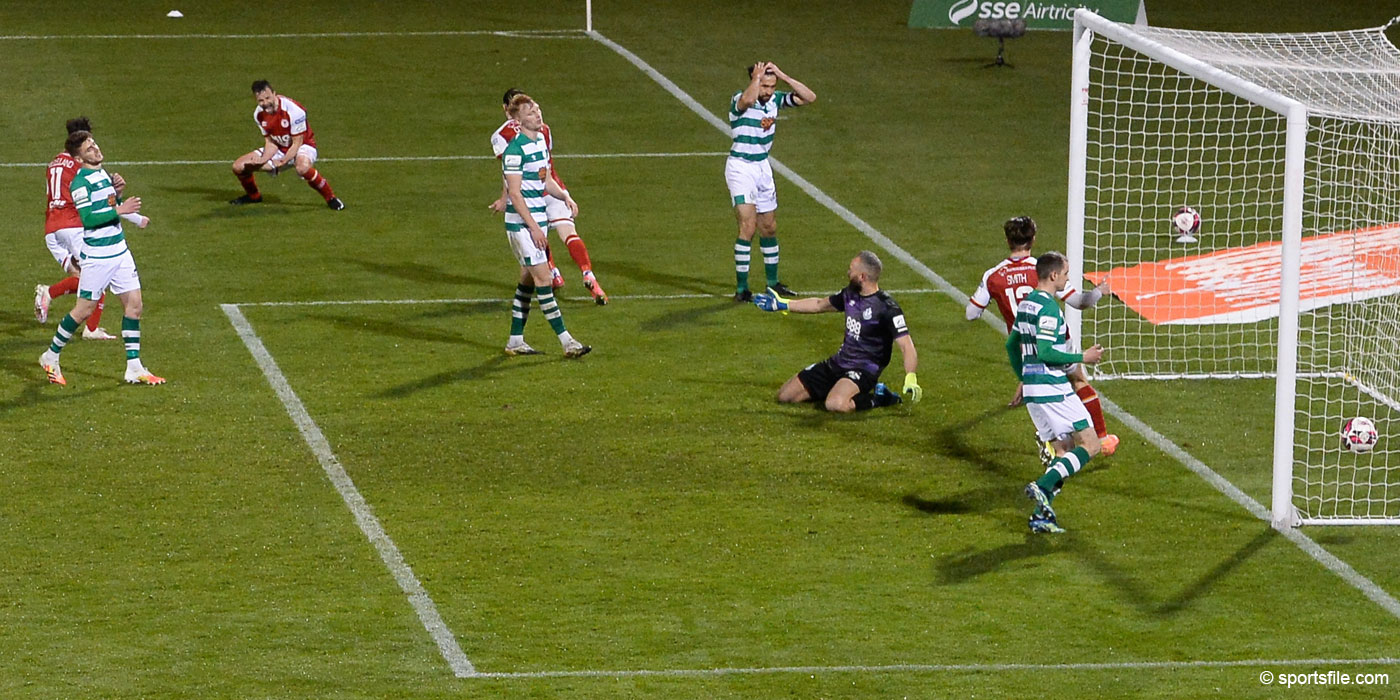 The Saints began their 2021 League of Ireland season on Friday night with a 1-1 draw against defending champions Shamrock Rovers in Tallaght. A late Robbie Benson goal looked as if he had won it, but Aaron Greene responded almost immediately to equalise, as the sides shared the spoils.

With five debutants starting, Pat's started the brightest, looking very lively, stringing together some impressive passes, especially in the middle third. Despite winning some early corners, Alan Mathews' side were unable to create any clear-cut chances in the opening half, despite looking comfortable on the ball.

Viteslav Jaros was forced into action on the 20th minute mark when Graham Burke found space on the right. His attempt to drill the ball back across the goal was well cut out by Jaros. Lee Desmond and Robbie Benson both made important blocks; however, chances were few and far between for both sides in the first half.

The second half started similar to the first, with St Pats enjoying most of the possession. Their first real chance came just after 58 minutes of play. The impressive Chris Forrester picked the ball up in the middle of the park and played a wonderful ball out wide to Matty Smith on the left. Smith cut in onto his right foot, only for his goal bound shot to be well saved from Alan Manus in the Rovers goal.

Jaros was certainly the busier keeper in the second half and made three wonderful saves in a 10-minute spell. He was at full stretch to keep Danny Mandroiu out on the 72nd minute mark, following a shot from just outside the box.

One minute later, Jaros was again called into action again and got down well to save a low Graham Burke free kick, which had cleared the wall. Another Graham Burke deflected shot looked as if had snook in after 80 minutes, but Jaros was on hand once again to keep the ball out, adjusting his feet and making a spectacular save.

With the game seemingly destined for another 0-0 draw, the game dramatically sprung to life, with just three minutes of normal time left.

Firstly, Robbie Benson found space on the left, and drilled the ball into the box, where Hoops' defender Roberto Lopes could only divert the ball into his own net.

However, the lead lasted just 90 seconds. Former Saint Sean Hoare sent in a cross which was met by substitute Aaron Greene who rose highest to head the ball into the net to equalise as the game ended 1-1.

Despite the late goal being conceded, Manager Alan Mathews and Head Coach Stephen O'Donnell will be pleased with the performance, with impressive performances across the side including a Man of the Match award for defender Lee Desmond.

Our attention now turns to next Saturday night (26 March) at 4pm when the Saints face Drogheda United in the first home game of the season in Richmond Park.