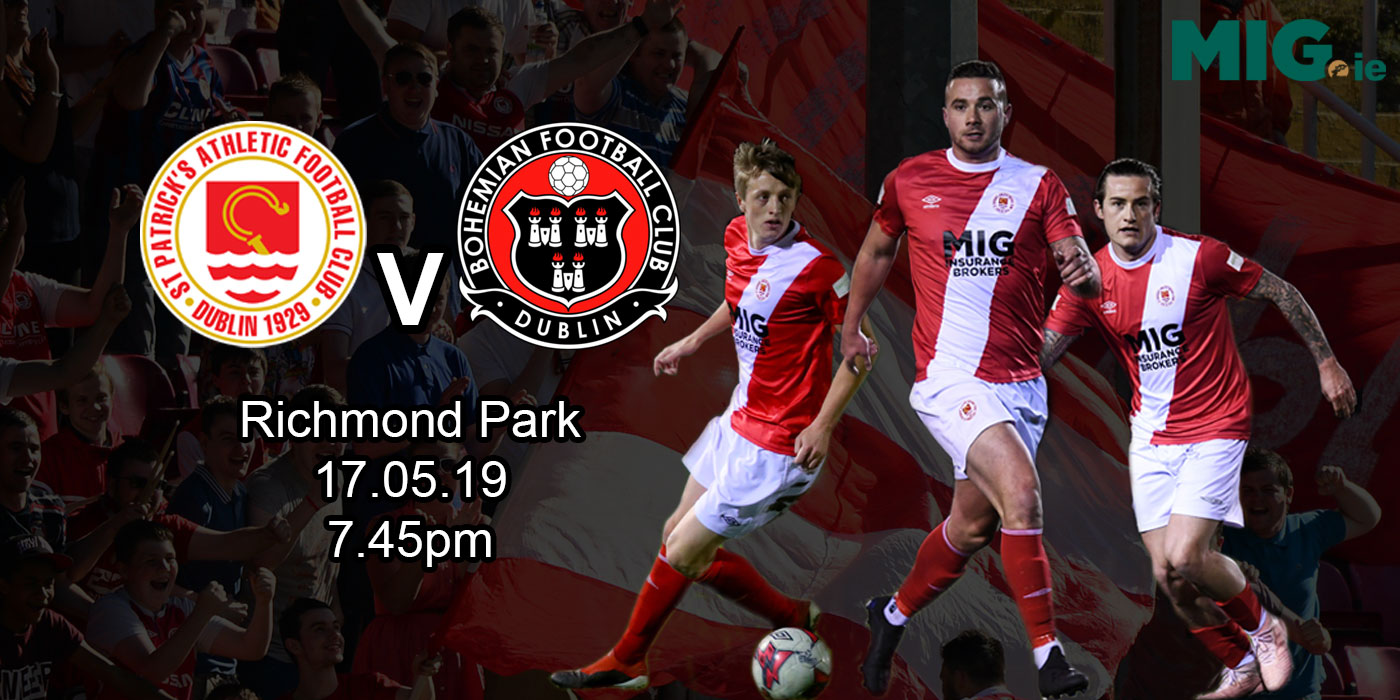 Friday's Dublin derby has seen good pre-sales ahead of the game, and supporters are encouraged to purchase their tickets beforehand online at tickets.stpatsfc.com - CLICK HERE TO BUY NOW!

Speaking to stpatsfc.com ahead of the game, manager Harry Kenny spoke of his thoughts on last week's 1-1 draw against Derry City which saw Lee Desmond score his first goal in St Pat's colours.

"We started the game a little slow and then Derry got a good goal from Barry McNamee. But then Lee came up trumps for us. I don't think any goalkeeper would have saved his shot to be honest," Kenny admitted. "I was delighted for Lee as it was his first goal for the club and it was worthy of winning a game, however it got us the point and I was happy with that.

"We need to get more consistency in our play. We had three good wins in a row, and then two defeats before last week's draw. Derry was a tough place to go, particularly after the Waterford defeat where we were lacking in confidence. But the lads dug deep, particularly after going behind early on, and bounced back quite well. We played some really good football and showed the confidence to play as well, so I was very pleased with the bounce back from going down, and the attitude shown."

Assessing Friday's Dublin derby against Bohemians, Kenny admitted that he is expecting another tough challenge from Keith Long's side who defeated the Saints 1-0 in Dalymount Park earlier in the season.

"Pat's and Bohs is always a big derby game. We had a good crowd in Dalymount earlier in the season, and I imagine Bohs will have a good crowd themselves this Friday in Inchicore. I'm looking forward to it as both sides are going reasonably well. We know we will have a big crowd ourselves behind us and we want the points to claw back the gap to them, and also to make up for our last game at home against Waterford."

In team news, Pat's welcome back Kevin Toner from suspension. Harry Kenny is without the services of Dean Clarke, however the attacker has returned to light training as he builds up his fitness.

For Saints' defender Ciaran Kelly, the prospect of facing Bohemians in a big Dublin derby in front of a packed Richmond Park is one he is relishing as he told stpatsfc.com.

"These games are always a battle. Sometimes there is not much football played, but when it is time, you have put the foot on the ball and play but we'll be ready to fight for it as well. The atmosphere and bigger crowd brings the best out of you, and we all just want to do our best and get the three points for the supporters."

ÃƒÆ'Ã‚Â¢€Ãƒâ€¦Ã¢€Å“When You See The Fans There You Just Want To Do Really Well For ThemÃƒÆ'Ã‚Â¢€Ãƒâ€šÃ‚Â - @ciaran_3 has been looking ahead to tomorrowÃƒÆ'Ã‚Â¢€ÃƒÂ¢Ã¢€Å¾Ã‚Â¢s @SSEAirtricityLg game at home to Bohemians, having claimed a place in the team, heÃƒÆ'Ã‚Â¢€ÃƒÂ¢Ã¢€Å¾Ã‚Â¢s hoping for a huge Richmond Park crowd to roar our #Saints2019 on ÃƒÆ'Ã‚Â°Ãƒâ€¦Ã‚Â¸"Ãƒâ€šÃ‚Â´ÃƒÆ'Ã‚Â¢Ãƒâ€¦Ã‚Â¡Ãƒâ€šÃ‚ÂªÃƒÆ'Ã‚Â¯Ãƒâ€šÃ‚Â¸Ãƒâ€šÃ‚ÂÃƒÆ'Ã‚Â¢Ãƒâ€¦Ã‚Â¡Ãƒâ€šÃ‚Â½ÃƒÆ'Ã‚Â¯Ãƒâ€šÃ‚Â¸Ãƒâ€šÃ‚Â pic.twitter.com/mB74TrrgYK