Gary is a former Ireland U21 international who has established himself as one of the best goalkeepers in the League of Ireland over the past ten years.

He began his career at Shelbourne and spent time on loan at St Francis before moving on to Drogheda in 2000.

He won an FAI Cup medal during his five years there before moving on to Dublin City and Bray Wanderers.

Gary revitalised his career at Galway United where he spent three seasons between 2006 and 2008.

He joined the Saints prior to the 2009 season. During his first season he suffered a loss of form under Jeff Kenna.

Gary was reinvigorated under Pete Mahon last season with some stunning displays which culminated in his selection for the Airtricity League XI for the opening of Aviva Stadium.

Gary made his 100th appearance for the Saints against Dundalk on 13th June 2011.

Signed for Sligo Rovers at the end of the 2011 season. 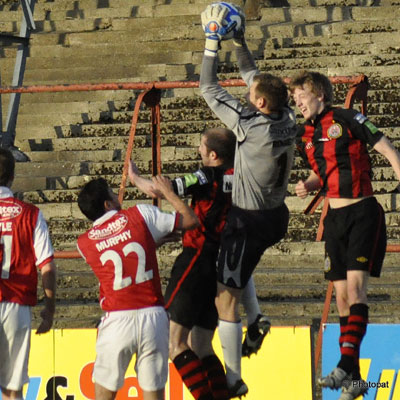