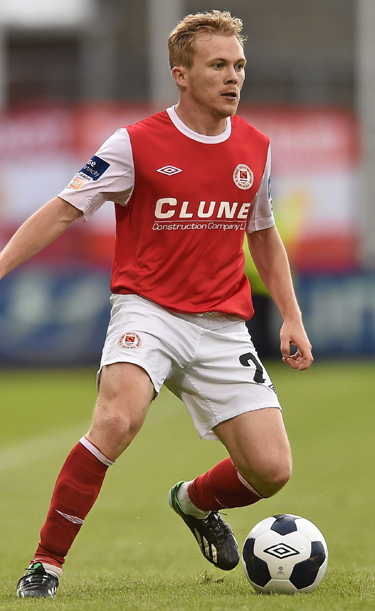 24 year old midfielder Conor joined the Saints ahead of the 2014 season having spent two years at Dublin rivals Shamrock Rovers.

McCormack is known to be a tough tackling midfielder, with the ability to also be a neat passer of the ball.

McCormack’s ability was evident to see as a youth as he gained caps at both U15 and U16 level for the Republic of Ireland. This recognition at an international level led to the Carlingford born man attracting the interest of many sides, including English giants, Manchester United.

Aged just 16 at the time, the Louth man would sign a youth contract with the Red Devils. McCormack developed in his time at the Old Trafford club, and during his time there, he won the Republic of Ireland U17 Player of the award in 2007.

However after a failure to receive opportunities to play, McCormack left the club, turning down the offer a contract extension. McCormack made the interesting decision to move to Italian Serie B side U.S. Triestina Calcio. Unfortunately though his time in Italy proved similar to his spell in Manchester, as Conor failed to make a first team start in over two years at the club.

Therefore in 2011 when the opportunity arose, McCormack left the Italian side and came back to Ireland where he joined Shamrock Rovers in 2011. In his first year with the Hoops, McCormack played a central role in Michael O’Neill’s side, playing a key role in midfield throughout their run to the Group stages of the Europa League.

McCormack signed for a further two seasons with the Hoops after that, however his time from then on proved to be mixed as he failed to nail down a regular place in their starting eleven.

The Louth born midfielder, who can also play at right back when required, made his competitive début for the Saints as a substitute in our 2-1 Leinster Senior Cup win against a side close to his own home in Carlingford, Co. Louth - Dundalk FC.