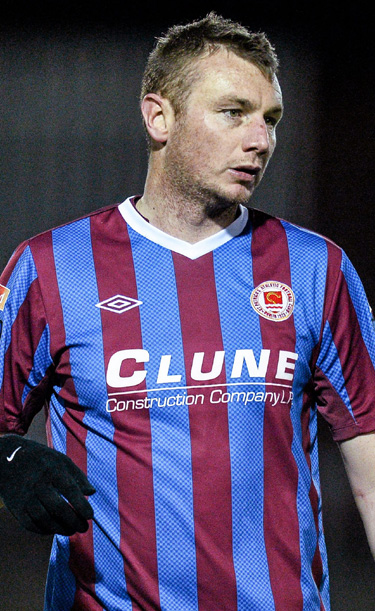 Kenny is in his third year season with the Saints in 2014 having joined the club from hometown club Waterford United.

Kenny has been a hugely influential figure in his time with the Saints to date, being at the heart of the Saints which has claimed the best defensive record in both the 2012 and 2013 league seasons.

Kenny’s footballing career at schoolboy level was spent with both Johnville and Waterford Bohemians, before Browne made the move to the League of Ireland with Waterford United in 2004 having been signed by Alan Reynolds.

In his time with the Blues, Kenny learned his trade for five seasons before his ability was spotted by Liam Buckley who signed the defender for Sporting Fingal ahead of the 2010 season. During his time with the north Dublin side, Kenny impressed greatly and played a role in the sides Europa League tie against Maritímo – the Dublin side defeated 6-4 on aggregate by the Portuguese side.

However Browne’s time at FIngal came to an abrupt end as the club withdrew from the League of Ireland just weeks before the start of the 2011 season. Having been part of Fingal’s pre-season preparations up till then, Browne found himself without a club. As a result, Browne moved back home to Waterford where re-joined the Blues for the 2012 season.

However once Buckley found himself back at the helm of the Saints, Kenny was one of the first players signed by the Saints’ boss.

After suffering the heartache of the 2012 FAI Cup final defeat to Derry City in the Aviva Stadium, Kenny and the Saints’ squad bounced back in 2013 to claim the league title with Browne named in the PFAI Team of the Year.