Jim McAleer from Glasgow who played for St Patrick's Athletic under manager John Colraine back in the 1970-71 season made his first return to Richmond Park last week.

As well as taking in the Dundalk game, Jim met with club staff and was given a tour of the ground.

Recalling his time with the saints Jim said â€śI was playing for St Mary's Boys Guild in Glasgow our trainer John Rice at the time knew John Coltraine so I was brought over for a trialâ€ť.

â€śI enjoyed my season in the League of Irelandâ€ť, said the former midfielder â€śI was living beside the ground on Emmet Road, I got to see a fair bit of Dublin and I got to travel all over the country playing the likes of Sligo, Dundalk, Waterford and Athloneâ€ť.

While he enjoyed his time with the Saints it wasn't a very successful time on the pitch for the Saints â€śwe did make it to an FAI semi-final but we ended up losing 1-0 at Tolka Park in controversial circumstances and that was the closest we came to gloryâ€ť.

Jim now lives in his native Glasgow with his wife Roberta and though a keen supporter of Celtic, he still looks out for the St Pat's results and has fond memories of his time in Inchicore. 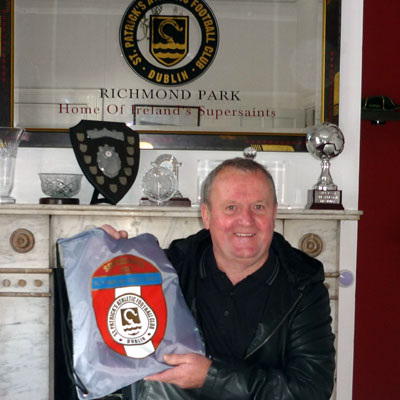