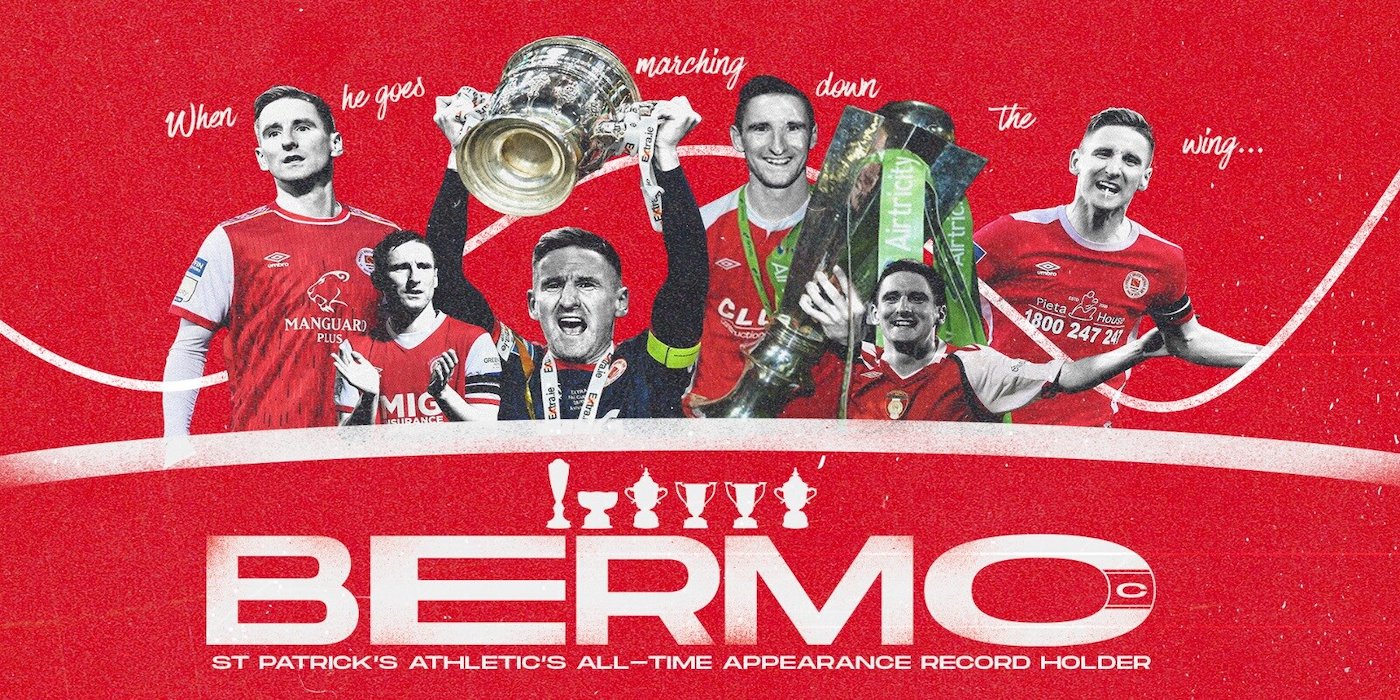 Bermingham To Depart After 13 Seasons

St Patrick's Athletic's record appearance maker Ian Bermingham will leave the club at the end of the season, bringing to an end his 13 years in Inchicore.

Ian scored some famous goals in the famous red and white (15 in total) and has made numerous key contributions to the club and the local area off the pitch.

"After 13 years, I'll be leaving at the end of the season and am more than likely going to retire from professional football.

It's a great journey that I've been on at the club, filled with really really good memories.

I'm content with my decision, it's the right time and I'm looking forward to the future.

It's been in my mind for a number of years now, when am I going to finish? When you get to 30 you start to think about it.

I went back to college and did a degree to have something in my back pocket for when I do decide to call it a day.

When we won the cup at the end of last season, it was one of the best days of my career, I was thinking of doing it then, but I said no, I'll give it another year.

So I spoke to Garrett Kelleher (Chairman) and told him that no matter what happens, I'm going to leave at the end of this season and that's the decision I've come to and I'm content with it.

I could start naming a load of people that I've become friends with, and those who have played a part in and contributed to my St Pat's career and my life, there's just so many of them. So I'd just like to thank everyone who has played a part in the 13 years.

Football is all I've ever done, St Pat's is my club and it's been a brilliant time."

You can watch Ian's full, extended interview on our Youtube channel now (link above), or listen on our Talking Saints Podcast, which is available on Apple Podcasts, Spotify and more.

"Bermo is one of a kind, the achievement of playing for one club for 13 seasons is extraordinary and on behalf of everyone at St Patrick's Athletic and personally would like to congratulate and thank him for his enormous contribution to our club.

Ian Bermingham has been the outstanding left-back in the league in recent times; when the annals of the first 25 years of the domestic game in this century are being written, Ian Bermingham will be prominent.

His professionalism, attitude, work-rate and consistent top level performances have made him a role model and mentor for many underage players at the club.

When Bermo agreed to sign back for this season, at a time when the club had had the 'rug pulled out from under it' , he demonstrated leadership, loyalty and integrity which I will not forget. He and I agreed that this would be his last year as a Super Saint and that we would announce his retirement from St Pat's after our European involvement and now is the right time for us to make that announcement.

We plan to mark his incredible time with us with a testimonial early next year.

We wish Ian the best of luck for the future in whatever he does next, he'll always be welcome at Richmond Park and will be remembered as a St Patrick's Athletic legend, thanks Bermo and good luck!"