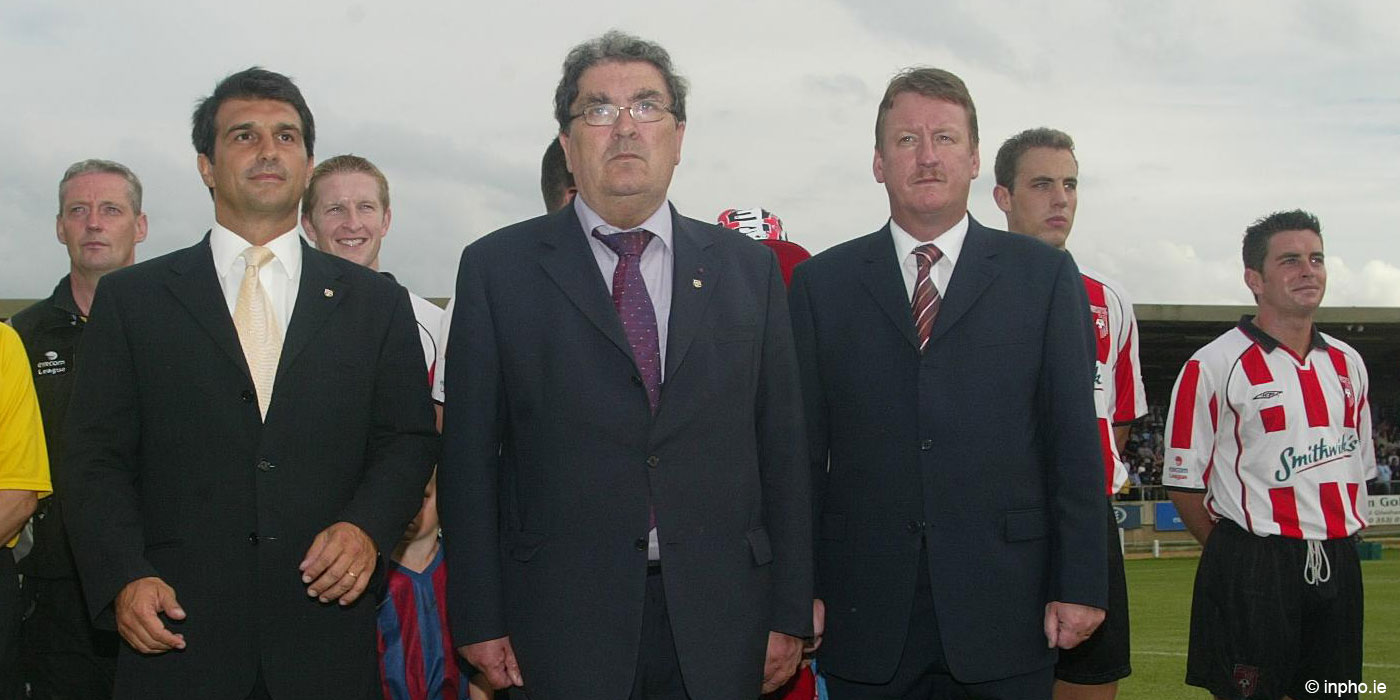 St Patrick's Athletic FC wish to pass on condolences to Derry City and the Hume family at the passing of John Hume.

A great man who contributed greatly to the local community in Derry and beyond, and was also a big fan of the Candystripes and the League of Ireland.

In early 1997 John Hume was an exceptionally busy man but he graciously took time out to speak to Tom Hanley for the St Pat's matchday programme for our game with Derry City. His love for the League of Ireland football and his pride in Derry people shone through.

Given your very heavy commitments, in Northern Ireland, in Westminster and in Europe, what opportunities do you have to follow the progress of your native Derry City team?

It is almost impossible for me to get a chance to go to a much because of work pressures and other commitments. But I follow progress through the local media as well as the local papers in the Derry area, Radio Foyle, with its daily sports pieces, is great for keeping someone like me in touch with the progress problems or prospects in local soccer. Some might argue that this is spoiling local fans, who may have got lazy about getting to the Brandywell.

From your position as a keen observer of Derry's progress, how would you access their title prospects?

The current Derry team are obviously performing well, with a fair degree of consistency. The fact that they have maintained their leading position recently, in spite of injuries and other problems is a testimony to the players as well as Felix Healy. In politics prophecy is the most gratuitous form of error so I have to be careful about predicting the Championship for Derry City. A week is a long time in football, as in politics

Derry City attracted massive crowds in the early years of League of Ireland football. Do you see such crowds returning again given the team's recent success?

The big gates that Derry used to get have a course dropped. Something like this was to be expected as a novelty factor wore off and as financial limitations tended to curb on-field presence, with some favourite players moving. The impact of live football on satellite had been another factor and even moving games to take account of this creates a variable pattern of matches, which does not encourage habitual support. I hope that approaching success will generate an uplift and support an income at the Brandywell. The team deserve it, the manager deserves it, the board deserve it, as to all the back-up workers for the club and, not least, the steady supporters.

What are your thoughts on the proposed relocation of Wimbledon to Dublin?

If live television coverage of British soccer can have an impact on FAI National League attendances, then a British club moving to Dublin would have to cause concern. I can imagine some people thinking it will be a convenient way of seeing leading English teams, but that would clearly represent the threat and a cost to our own clubs and our own League. The FAI position on the matter is perfectly legitimate.

What is the essential quality which you consider Derry City supporters have?

I think that the supporters have always shown a sense of humor and a sense of honor which has reflected well on the city, indeed on the country where they have played in Europe.

Finally while your overall impressions of St Patrick's Athletic?

I am first of all honored to be given the opportunity of featuring in your matchday magazine and speaking to the supporters of two such fine clubs. St Pat's obviously represent their proud community with the same commitment and style as Derry my home city. I would like to visit Richmond Park sometime soon and I hope tonight's game is as good as so many previous ones between these two fine clubs.