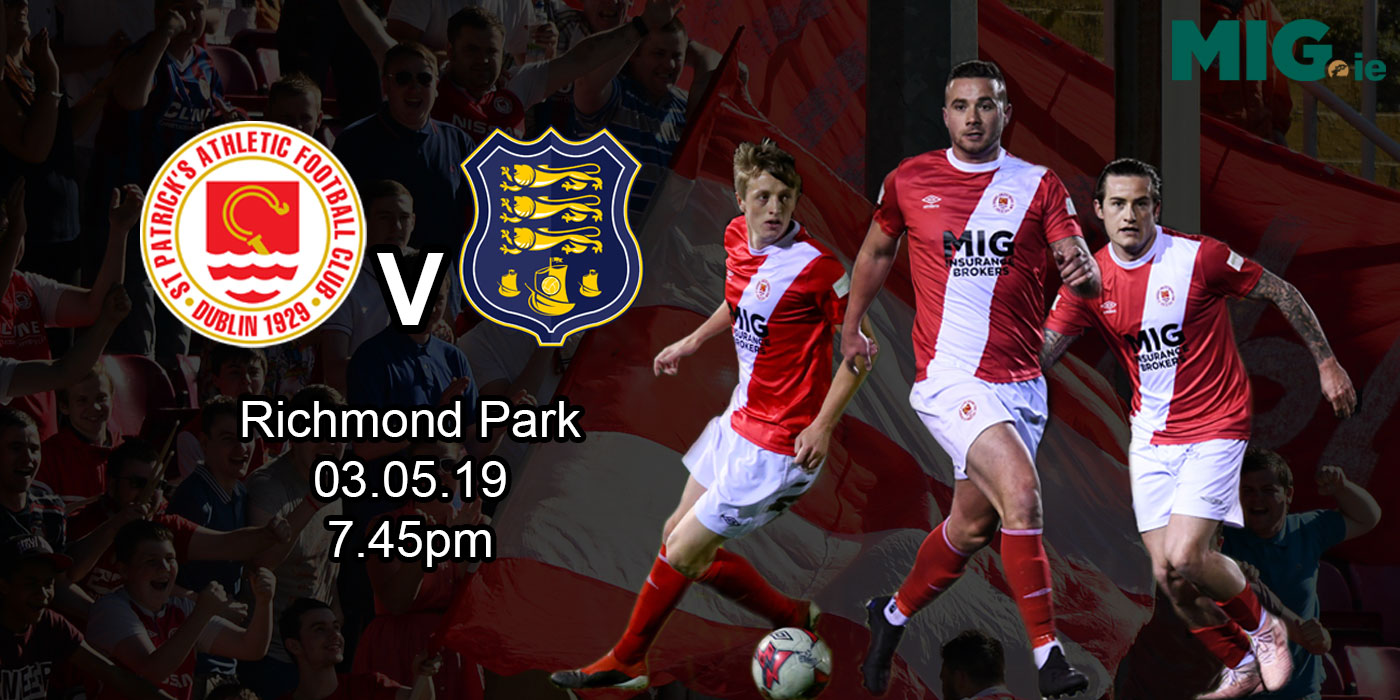 St Patrick's Athletic host Waterford FC on Friday night in Inchicore as they look to return to winning ways in the SSE Airtricity League, kick-off 7.45pm.

PURCHASE YOUR TICKETS FOR FRIDAY'S GAME AGAINST WATERFORD HERE NOW!

The Saints will be looking for a third successive home league win as they aim to recover from Monday's 1-0 Dublin derby defeat to Shamrock Rovers in Tallaght Stadium.

Pat's and the Blues last met in March when Alan Reynolds side claimed all three points with a 2-0 win through goals from Aaron Drinan. Speaking to stpatsfc.com, Saints' manager Harry Kenny reflected on Monday's defeat to the Hoops, while also looking ahead to the challenge of facing Waterford.

"I thought we played quite well on Monday and while the result was disappointing, I was pretty pleased with our performance overall. I thought we'd good passages of play, created a number of chances, didn't take them. Brendan [Clarke] had one or two saves to make, they had a few corners, which we dealt with fairly okay, and then we had a great chance near the end from Dean [Clarke].

"We have Waterford now on Friday back in Richmond Park and we will be looking to bounce back and try pick up another home win. We had a disappointing loss to them in the RSC earlier in the season, but it could have been a different game if we had taken our chances. Our home form has picked up lately and we have won three of our last four in Inchicore so with a good crowd behind us, hopefully we can make it tough for Waterford and pick up a result."

In team news, the Saints welcome back Conor Clifford and Kevin Toner from suspension, while Dave Webster is a doubt through injury. Midfielder Rhys McCabe however will miss out after suffering a concussion in the loss to Shamrock Rovers.

"Rhys picked up a concussion on Monday night and is ok now. You have to be careful with these things so we took him off immediately on doctor's advice and he will need a week to recover from that," Kenny confirmed to stpatsfc.com.

For the Saints' 20 year old defender Ciaran Kelly, Friday's game is a crucial one as a win would not only maintain a lead over Waterford in sixth place, but it would also ensure the Saints stay on the heels of Bohemians and Derry City in the race for European football.

"We are playing better in recent weeks and even though we lost the other night to [Shamrock] Rovers, we felt our performance was good and we gave them a lot of problems and were unlucky not to get a point. There is little between us and Waterford in the league so if we can get three points, it'll keep them that bit behind us and also try and catch up on the few teams ahead of us."

Kelly, who signed back with Pat's after a year with Drogheda United, is familiar with two of the Blues squad having played under 19 football at Pat's with Rory Feely and JJ Lunney in Inchicore. The centre back told stpatsfc.com that the duo are just two players the Saints will have to watch out for come kick-off.

"Friday's game against Waterford is a massive one. We didn't do too well against them the last day so we have to really up our game to get a result. I'd know Rory Feely and JJ Lunney well from our time in the under 19's here at Pat's and they are two good players. Waterford have a strong team and from looking at them last year, they are a good technical team and play good football so we know we will have to be well organised and close to our best in order to get a result."