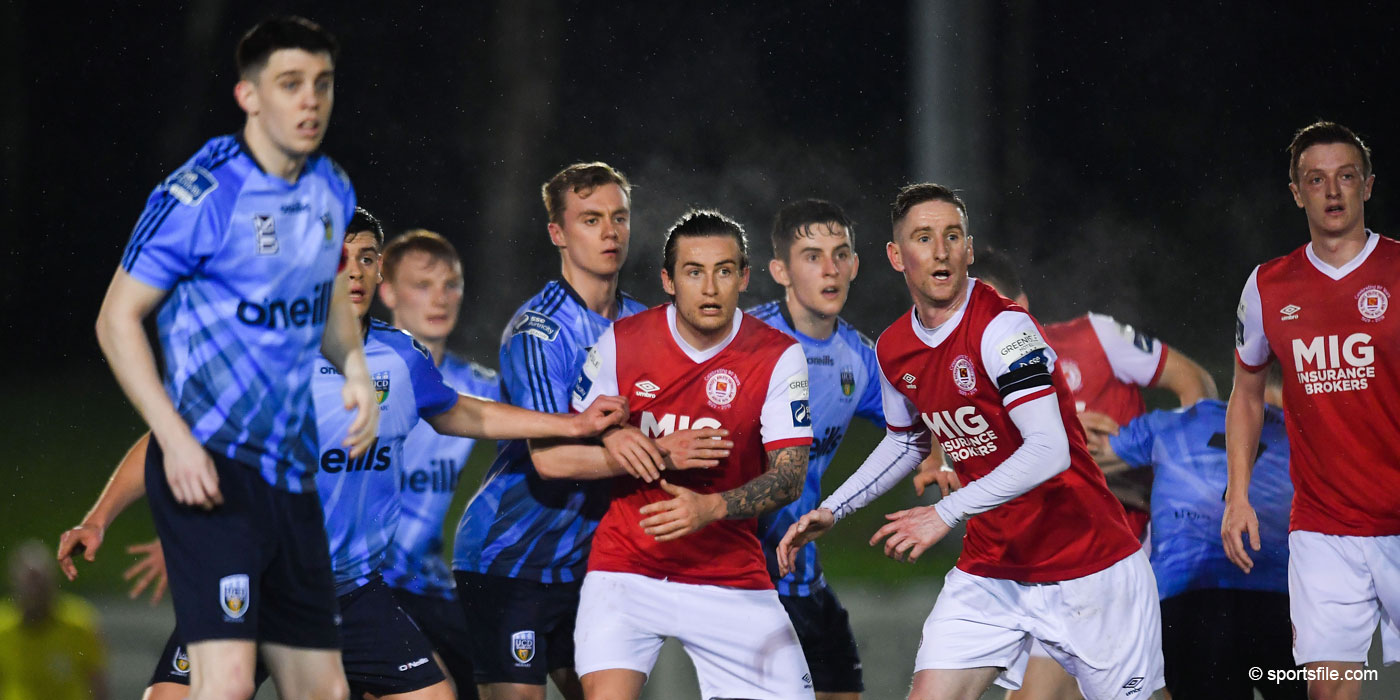 St Patrick's Athletic host UCD on Friday evening in Inchicore as the Saints go in search of a third successive win in a row in the SSE Airtricity League (kick-off 7.45pm).

CLICK HERE TO PURCHASE TICKETS FOR FRIDAY'S GAME AGAINST UCD

Pat's head into the game following a 2-0 win over Finn Harps in Ballybofey last Monday with midfielder Conor Clifford and Saints' top-scorer Mikey Drennan on the scoresheet.

Manager Harry Kenny will be looking for an improvement on his side's previous result against the Students which saw the sides play out a 1-1 draw in the UCD Bowl back in March.

In team news, the Saints are without the services of defender Dave Webster through suspension, but otherwise Kenny will have a full squad to select from for Friday's all Dublin clash.

"It was a very positive weekend in scoring four and conceding one overall. I thought we played very well against Sligo and could have been out of sight at half-time," Kenny told stpatsfc.com. "The Harps match was a different type of game as there wasnâ€™t a whole pile of football. I was glad to see a different side of us in that sense of things as it was a battle and we came through with the right result.

"The wins we have picked up lately have been important and help build momentum. The results help breed confidence and the lads are in good form and we are playing well. We are chasing teams down now, so we are just now focused and looking forward to Fridayâ€™s game against UCD."

Reflecting on the sideâ€™s 1-1 draw against UCD back in March, Kenny knows his side will be in for another difficult examination against the Students, but it is a test he hopes they can pass.

"They are very, very good. They deserved their draw against us in the first game in the UCD Bowl so we are preparing for a very difficult game. They have a philosophy there which they stick to so you have to admire them for that. They will play some good football so we have to get amongst them and be at our best to get a result, but it is one we looking forward to."

For Saints' defender Kevin Toner, the Saints' recent run of form has been something to take encouragement from and the former Aston Villa defender is hopeful that Pat's can continue the recent form which sees the club now just outside the top four.

"It was a professional performance from the boys," Toner told stpatsfc.com when looking back on the recent 2-0 win in Donegal. "Harps were well organised so once we got the first goal, that was key as they had to come out and that only gave us more space and chances to play and we got the second goal. Fair play to all our supporters as well for making the trip as it is a long journey so it was great to send them home happy."

However having featured in the earlier game in the season against 'The College', Toner knows that he and his teammates will need to be at their best to record a fourth home win of the season.

"This UCD game is a big one as we drew with them last time. They are down near the bottom and we know that if we are hoping to continue improving and climbing the table, we need to beat teams around us and below us. It has been a tough few weeks with games on a Friday-Monday basis now, but I think we are after picking up a bit of form, especially with two wins in our last two games. Hopefully we can now just keep that going."