One group that has definitely been making their presence heard this season with their non-stop chanting and drumming has been The African Irish Football Supporters Club.

Richard Oyewole leader of the Club said “Inchicore has been the home for many Africans settling in Dublin. I think one of the first African stores opened in Dublin back in 1997 was in Inchicore and now there are more than six African stores in the village.

Since St Pat's are based here we have adopted them as our League of Ireland team to support.

Africans are football crazy especially nations such as Nigeria, Cameroon, Ghana, South Africa, Senegal and the Ivory Coast and we always like to bring some glamour and excitement to the teams that we support”.

However for Richard the supporters' club is about a lot more than football –“Sport is a universal language and I think in Ireland football can play a part in bringing different communities together.

I think we Africans can use our energy and passion for football to win the hearts of Irish people and that is one of the main reasons that the African Irish Supporters Club was established.

And what about the football on show at Richmond Park this season? “It's great to see St Pat's as the top club in the Premier division of the Eircom League and they deserve to be there. I also think it's great that St Pat's have recruited an African player like Joseph Ndo.

He's a wonderful player and a role model for both communities. For the future I would like to see the club perhaps do some talent hunting among the ethnic minorities in the Dublin area and of course to continue its work promoting integration within the communities”. 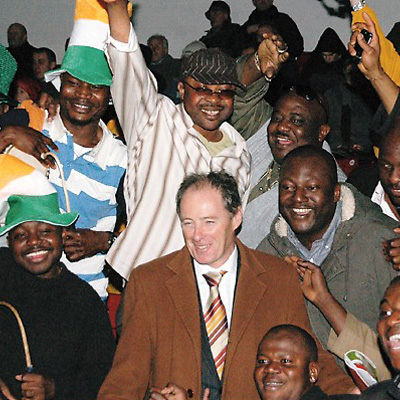